EVEN though we had no game last Saturday we still came out of the weekend top of the league after Cambridge conceded a late equaliser against Barrow which stopped them from climbing above us. We are clear by a point with a game in hand, and more importantly, we are four points clear of the chasing pack for automatic position with a game in hand. When you don’t have a game you always find yourself watching the scores coming in whether it is on Soccer Saturday or on the apps on your phone and it is always the same a rollercoaster of emotions. Saturday was no different and I actually thought Cambridge had won until I got a text saying ‘I bet you are happy with that late goal’ and I had no idea who it was about. As nice as it is to be in the position that we are it is still early in the season and there are a lot of games left but hopefully we can keep this up. 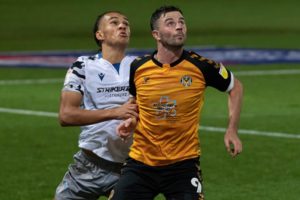 Looking up! Even without kicking a ball this weekend, Pádraig Amond and Newport County remain top of League 2
Photo: @nicnacnoopixs

It is back down to business for us in the league as we return to action with a home game against Port Vale on Saturday. Port Vale are just outside the play-off places at the minute and have been very consistent this season so far and they will have aspirations of being prompted this year or at least making the play-offs. They were very unlucky to miss out on the play-offs last year after it was decided that the remaining games left in the season would be decided by points per game while Port Vale were in the play-offs but they had played an extra game so missed out to the eight place side instead. They will want to bounce back after losing last week 4-3 at home to Tranmere Rovers after leading 3-2 when the game was in injury time.

It was nice to have a free weekend for once because we had played a lot of games recently so all of the lads will have rested up and be ready for another tough month of fixtures ahead of us. In the next month we have a minimum of nine games which would test the resolve of any squad. We have a couple of players coming back from injuries too so it will be great to have those lads available and competition for places is really heating up now. It is all extremely healthy competition, though, and every player in the squad is pulling in the right direction and we are pushing each other to the limit to give ourselves the best chance of being successful this year.

We are on a great run at the minute and that was reflected by our manager Michael Flynn getting the manager of the month award and one of our players, Scott Twine, being nominated for player of the month. While Scott didn’t win the award it was great that he was nominated and to be honest there could have been another couple of players nominated, one of them being Josh Sheehan and that would have capped off a dream couple of weeks for him. Sheezy made his international debut last Thursday for Wales against USA and it was a great moment for him and his family. All of the lads were delighted for him and it was a cap that was very deserved and hopefully it is the first of many. We have some very good players at the moment and ones who will move on eventually to bigger teams unfortunately for Newport County but the hope is that we will be able to hold on to them long enough to possibly be promoted and for them to leave the club in a better place.

The training sessions after a free week are always tasty and great to look forward to. Players are always raring to get going again and so are the coaches. The coaches always come out a little happier though as they get to punish us with a bit of extra running after the couple of days off for the players. It is the first full weeks training we will have for a few weeks without a midweek game so that allows us to work on some extra things out on the training pitch when players can train properly and not just a walk through session because of recovery for the following game. Those weeks can be very difficult for the coaches because they have to get the right balance between those who have played the previous game who are recovering while lads out of the team need to have a very tough session to get them ready for the next game.

The Padráig Amond column appears in the Carlow Nationalist every Tuesday