Heartbreak for Carlow hurlers in Tralee 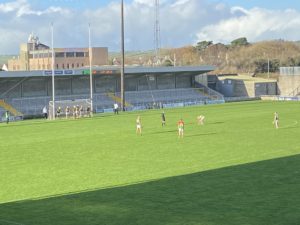 Results earlier in the group stages meant this was for all intents and purposes an All-Ireland semi-final and it was a game that was certainly played with that sort of intensity.

A sixth minute Jon Nolan gave Carlow a good start and they led by 1-6 to 0-6 going into the water break.

However, two Daniel Collins in the second quarter, the second coming in the last attack of the half, put the home team five clear at the break – 2-12 to 1-10.

It set Carlow a stiff challenge and a big hill to climb in the second half. The first ten minutes passed off with Carlow making any sort of inroads to the Kerry lead but slowly they began to build some momentum.

A 65 from Shane Conway straight out of the second half water break put Kerry back into a four point lead but Carlow were nothing short of magnificent in the next ten minutes.

Two Marty Kavanagh frees halved the Kerry lead but were quickly answered back by points from Padraig Boyle and Conway.

Carlow then rattled off six points in a row to move into a two point lead by the 66th minute. The last of those points came from a brilliant James Doyle point on the run and it seemed like Carlow were kicking for home at just the right moment – but the huge effort taken to get back into the lead took its toll and that was the last Carlow score of the game.

Kerry scored twice to tie the scores going into injury time and from there, Michael O’Leary was the hero for the Kingdom with two well taken points during the four additional minutes.

It means that Carlow miss out by the finest of margins. A goal conceded in the fifth minute of injury time in the first game against Antrim looks very costly now, while it was only two injury time points that separated the teams today here in Tralee.

It appears that the game scheduled for next week, against Westmeath, which now is of no consequence at all will not go ahead, so the curtain comes on Carlow’s season in disappointing fashion here in Kerry.

Full reports, photos reaction and analysis from the game in Tuesday’s Carlow Nationalist.