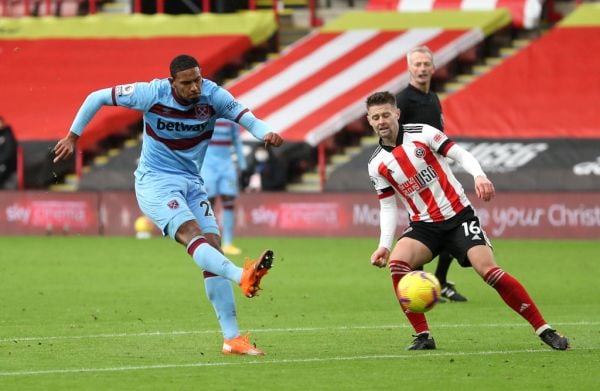 The Blades were a revelation last season on their return to the top flight, finishing ninth in the table, but are finding life much tougher during their second campaign.

Chris Wilder’s side have only one point from their nine matches after Haller’s strike from the edge of the penalty area after 56 minutes inflicted a fourth straight loss and an eighth Premier League defeat.

The Hammers, on the other hand, have 14 points from a tricky opening set of fixtures which has already seen them play Arsenal, Wolves, Leicester, Tottenham, Manchester City and Liverpool, and David Moyes’ men are in the top 10.

Fabianski parried a low shot from Oli McBurnie before the Pole then reacted quickly to deny David McGoldrick on the follow up.

The visitors grew into the match and enjoyed a sustained spell of pressure midway through the first half before Vladimir Coufal brought a good block from Aaron Ramsdale.

The Hammers should have taken the lead after 34 minutes when Haller headed the ball down into the path of Tomas Soucek inside the penalty area but, with the goal at his mercy, the midfielder scuffed his shot wide.

A looping header from McBurnie saw Fabianski make another decent save just before half-time, this time tipping the ball over the crossbar

West Ham went ahead early in the second half. Jarrod Bowen collected the ball on the half turn following a clearance by Ramsdale and embarked on a driving run towards the home defence.

Bowen released the ball to Pablo Fornals’ whose shot was blocked at point-blank range but the ball ricocheted into the path of Haller, whose first-time shot from the edge of the penalty area flew into the roof of the net.

Blades goalkeeper Ramsdale got a hand to the ball but he was unable to keep it out.

The Ivory Coast striker has scored four goals in cup competitions this season but his effort on Sunday was only his second goal in the Premier League this campaign and fourth in 2020.

Wilder’s side were suddenly all at sea and looked in danger of conceding again. Coufal and Declan Rice saw shots bravely blocked in a goalmouth scramble, before Haller scuffed another effort wide.

The hosts’ best chance came after 76 minutes. Substitute Rhian Brewster played a delightful ball behind the West Ham defence into the path of McBurnie.

The Scot’s first touch was good but, with the goal at his mercy and one-on-one with the goalkeeper, he snatched at the chance and blasted his effort against the crossbar.

It left the impression that it would not be the Blades’ day and it proved to be the case as they slipped to another defeat.

Paramilitary threat made against journalist at Belfast paper