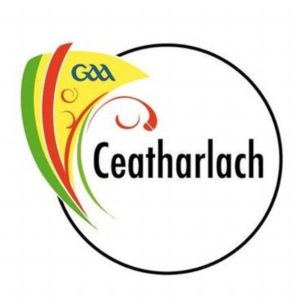 THERE are two nominations for the post of County Chairman which will be voted on at Carlow Convention which take place on 15 December. With Covid restrictions still in place it is not been announced whether Convention will take place at a nominated venue or whether it will go ahead by video link.

Current Chairman, Sean Campion, has to step down as his five years in office are up but he is set to move into the post of Treasurer which is vacated by Cormac O’Toole. Liam Foley (Kilbride) and former Leinster Chairman, Jim Bolger (Clonmore) contesting the post of Chairman.

Tommy Murphy (Naomh Eoin) and Liam Barry (Bagenalstown Gaels) are vying for the position of President.

The posts of Children’s and Development Officers are appointed by the outgoing committee. George Darcy and Brian O’Neill are the respective officers currently in situ who are certain to be retained.

Development Officer: To be appointed

Children’s Officer: To be appointed