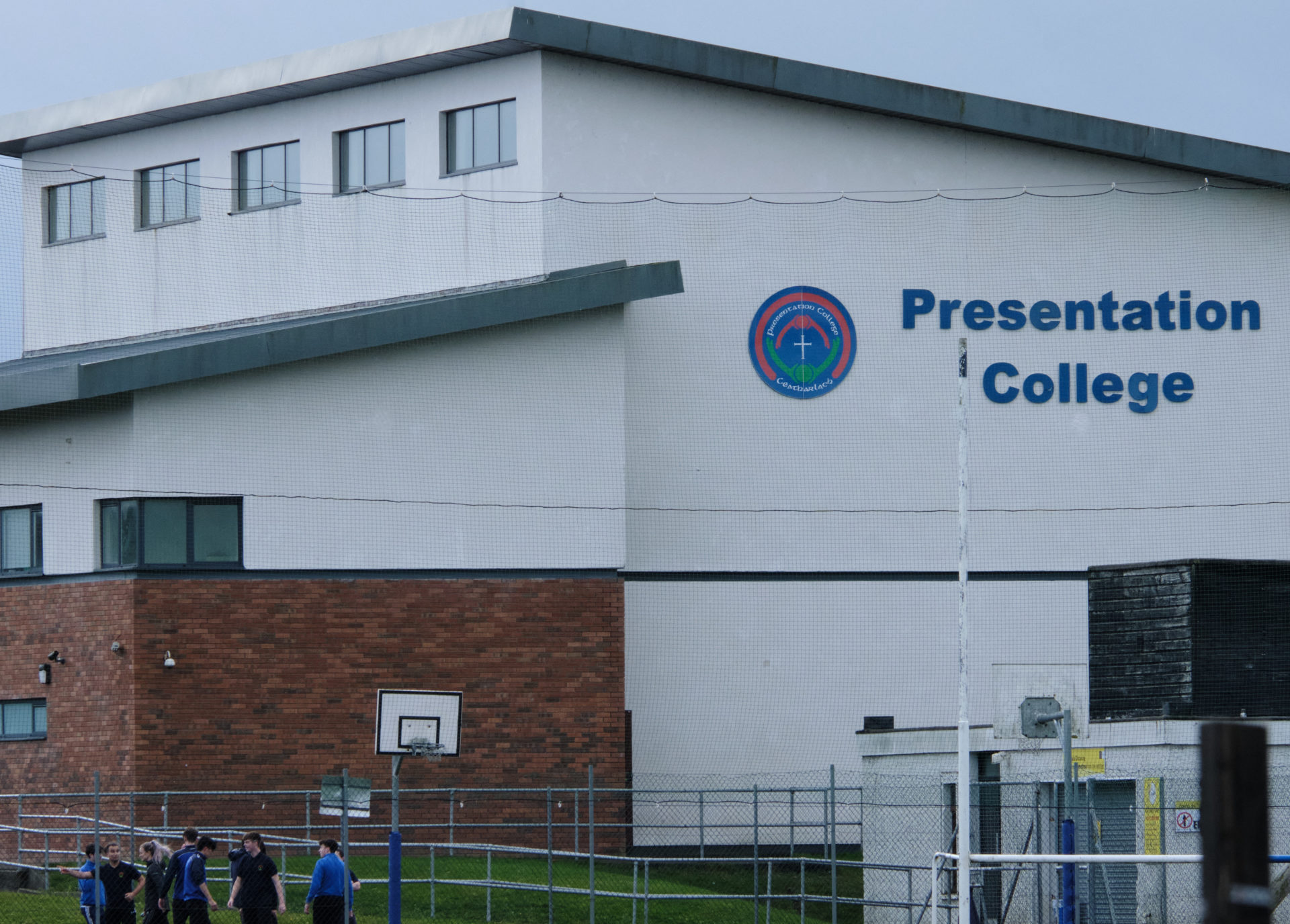 FEMALE students in Presentation College, Carlow were told not to wear tight leggings to school as it was “distracting” for their male teachers. Female students from sixth year right down to first year were called out class by class on Friday morning to be told that they shouldn’t wear tight clothing because it was too revealing of their bodies and made their teachers “uncomfortable”.

They were also told not to roll up their skirts too short or to tighten up their jumpers and sweatshirts as this was also too revealing of their body shapes. While girls of all years were spoken to, the younger ones were “given a PG” version of the rules, while the older girls were warned against showing off their female anatomy. The talks, delivered by each year head, left students angry and several were in tears.

Male students were not called out from class or advised against the wearing of tight clothing to school.

Students say that they now feel “degraded, paranoid, violated, disgusted and unsafe” in the school, while parents also contacted The Nationalist to highlight the situation.

Hundreds of parents also went on to social media to register their outrage and a petition against sexism in school has attracted almost 2,500 signatures as livid parents react against the sexualisation of young girls.

‘This is appalling, majority of students are 12-18 years old and should not feel sexualised by their teachers who they are meant to feel safe around,’ said the anonymous writer of the online petition. ‘Why should female students feel oppressed over a body part that everyone has?’

‘They’re CHILDREN, why are they being sexualized?’ one parent fumed on Facebook, while another commentator said that the school should be ‘educating the young men they are moulding about appropriate adult behaviour and consent. Instead of shaming young girls. I am disgusted that like in so many cases, the onus is put on the female, in this case a child, to carry the responsibility for controlling men’s inappropriate behaviour’.

Amid the social media frenzy, male teachers in Presentation College were accused of being ‘perverts’, while another parent said ‘we send our kids to school to learn, not to be judged by what they wear’.

Parents were also outraged that they had no prior notification that these special assemblies were taking place on Friday morning and neither were any notices sent home about adhering to school dress code.

“If these so-called male teachers can get distracted by 12- to18-year-old girls, they should not be teaching,” said Sandy Haughney, whose daughter attends the school. “We are trying to bring our children up in a way that they are not ashamed of their bodies; we are trying to teach our young men that just because she wears this doesn’t mean she wants that.

“This is all wrong, it was all very badly done,” Sandy also told The Nationalist yesterday, Monday.

“There’s still no word of explanation from the school. The Pres has always been strong on dress code, but this is about more than a uniform. These are girls aged 12 to 18 years’ old, they’re very body conscious. The girls should get an apology, they should feel safe in school.”

Many parents felt that the way the school dealt with the situation reflected badly, especially on the male teachers who were “genuine”.

Out of the 60 or so teaching staff in Presentation College, Carlow, only about 17 of them are men.

Yesterday, Monday, a notice in the girls’ toilet said that a survey had been carried out by the students, asking how they felt about what was said to them.

‘The school failed to consider how this would make the female students feel,’ the notice said, adding that the girls now felt ‘uncomfortable, degraded, paranoid, violated, disgusted and unsafe’.

The notice also said that ‘the students have made it clear that they will not conform to these degrading rules. We feel we deserve an explanation for how the situation was handled’.

The Nationalist contacted principal Ray Murray several times yesterday for a comment, but none was forthcoming before we went to press.