ON Friday at Gowran Park, champion trainer, Willie Mullins, recorded a four-timer on a track he knows like the back of his hand and always wants to do well on. For him it is a home from home.

Yet on a national scale, it could well be where he starts to get his season into full swing.

The statistics section on the Horse Racing Ireland (HRI) website yesterday morning (Monday) reveal Gordon Elliott is in first place on the leading trainers table with 101 wins out of 625 races with total prize money of €1,439,910. That is a strike rate of 16.2%.

In the early stages of the race for the jockey’s title, Rachael Blackmore has 50 wins from 305 starts, Sean Flanagan has 47 from 259 while reigning champion jockey, Paul Townend, attached to Closutton is sitting snugly in third with 46 wins from 137 starts. That is also an amazing strike rate of 33.6%.

Patrick Mullins from the Closutton yard admits he is happy with the way the season has started for his father, Willie.

“We have a very high strike rate. We have much less runners than say Gordon Elliott and Henry de Bromhead. Traditionally, we would start the season a lot slower. Our horses don’t usually have their first run until November where Gordon and Henry would be out September/October. Usually we finish the season very strongly. We are always trying to catch Gordon in the final few weeks of the season,” he said.

The four Gowran winners are all earmarked for further tests.

“It was a fantastic day in Gowran. It is our local track and Willie always wants to do well there. Energumene was our fourth winner of the day there and is a very exciting novice chaser. Possibly over the minimum trip. Cheltenham is a long time away for him so we will be looking to go to the Leopardstown Christmas meeting before that.

“Youmodor (in the 3-Y-O maiden hurdle) was our first winner for new owners, the McNeill Family. That was important. Again we will be looking to go to Cheltenham via Leopardstown with him.

“Annamix was very good. He was a horse with a big reputation as a young horse but has taken his time to show his full potential. He is very brave over fences and seems to be a better chaser than a hurdler,” says Patrick.

Ferny Hollow won the Champion Bumper at the Cheltenham 2020 Festival. Mullins said they have plans for him. 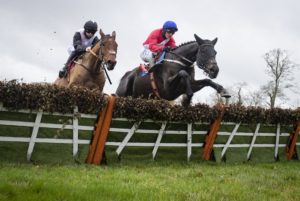 “He is probably our most exciting young horse. He can be temperamental but he races with a hood on which keeps him relaxed. He can go back to Cheltenham and go to the Supreme Novices. We are hoping he can emulate Champagne Fever who won those two races for us in 2012 and 2013.”

On a more sober note, there is no-one in racing who is not acutely aware what damage the pandemic has done to their sport. Yet Patrick knows there are so many others who are less well off. Racing people are doing what they have to do to keep their sport ticking over.

The lack of atmosphere is a worry but not in the white heat of battle with a wall of horses across the track and the finishing line fast approaching.

“From a jockey’s point of view, when we are in the race, it doesn’t make any difference. It is not like a soccer match or a GAA match where you can hear the crowd and respond to the crowd. When you are racing you are in a vacuum of your own. From a competitive point of view, it makes little difference but it is obviously very eerie before and after the race.”

But back to the yard and the drive for success.

“Paul has stepped into Ruby’s (Walsh) shoes seamlessly. Leading jockey at Cheltenham last year, champion jockey. Gold Cup winning jockey. Again, as our horses start to get into gear in December, he will, hopefully, start to catch Rachael,” the Closutton man speculates, while also giving kudos.

“Rachael is setting a fantastic pace. She lives in Leighlinbridge. I live with Brian Hayes, her boyfriend, so I have split loyalties between Paul and Rachael. Rachael rides out in our yard three days a week so it is an unusual sport in that way in that you are very friendly with your rival. We will always be cheering both Paul (Townend) and Rachael.”

The first part of the National Hunt season is nicely simmering. Fairyhouse next weekend followed by Punchestown a week later featuring the John Durkan Chase. Then the Leopardstown Christmas Festival.

You could say Willie Mullins is set to unleash a string of quality horses on the Christmas market. It really makes for mouth-watering reading. It will probably start with a trickle in Fairyhouse at the weekend.

“It will be hard to beat Honeysuckle and Rachael in the big race (Hatton’s Grace Hurdle),” predicts Patrick who says last year’s Morgiana winner, Saldier, could run at the meeting.

In the Royal Bond Hurdle, the Mullins team are well equipped “Shewearsitwell and N’Golo are the two main ones. Gordon appears to have a very strong hand in that so it might be a quiet for us next weekend,” suggests Patrick.

A week later the John Durkan Chase will be the feature race of the meeting.

“That has been a lucky race for us. Min has won it for us the last two years. I would imagine he will go back for the hat-trick. He would be very hard to beat. Over that trip of two and a half miles there are very few horses in Ireland who could beat him.”

After that, the Christmas Leopardstown Festival is just around the corner. All this meetings come with an inevitability that crowds will be unable to attend.

“If owners could get back it would be fantastic for the sport. For owners to see their horses is very important if the sport is going to survive,” notes Patrick who goes on to answer questions about some more stars in the yard.

“The main race in Leopardstown would be the Savills Chase. Kemboy ran the other day. He will probably be going back there. Al Boum Photo will skip Leopardstown. He will go down to Tramore. That works for him. Sharjah will be looking for a hat-trick in the Christmas Hurdle. He will face competition from our own Saint Roi,” explains Mullins.

Last week the second favourite for the Champion Hurdle, Saint Roi, was beaten in the Morgiana Hurdle by the Gordon Elliott trained, Abacadrabas

“Saint Roi was very unlucky last week. He got beaten where everything went wrong. He got boxed in at a crucial time and raced too keenly. I think he was the best horse in the race but he will get the preferential at Christmas. Sharjah going for a hat-trick and Rachael is on Aspire Tower. He is an upcoming horse too so you have the younger horses taking on the established brigade.”

As for one of the old favourites.

“Faugheen is back in training. He had a small set-back so he is on the easy list. We will take our time with him. No race in mind. If and when he is back on the gallops and is in good form we will race him. If we feel he is not himself, we won’t. As it stands, before he got that little set-back, he was in fantastic form. He has shown he hasn’t lost any of his ability yet. He will also have to step into open company this year,” agrees Mullins.

Last season Patrick’s father, Willie, flagged an unknown horse, Concertista. Typically he was proved right when the horse earned the right to go to Cheltenham and came away with a win in the Mare’s Novice Hurdle.

Is there any more surprises in the yard this year.

After that there is Bennie des Dieux who was touched off by Honeysuckle in the Mares Hurdle in Cheltenham.

“We will not race her a lot. I would imagine she will be out after Christmas and will follow a similar path to last year,” predicts Patrick.

“Out at Christmas time. Had a set back at the start of the season but is training.”

“Going to go over fences. Schooled brilliantly at home. Paul Townend was very happy with him so he will run in the next couple of weeks.”

The names trip off the tongue. You could go on forever. The National Hunt season is ramping up.