The Grade 1 John Durkan Memorial Punchestown Chase will bring some early festive cheer to the winning connections of Sunday’s €80,000 feature at the County Kildare venue.

A race which boasts a roll of honour including household names such as Florida Pearl, Beef Of Salmon, Flemenstar, and Cheltenham Gold Cup winners Kicking King, Don Cossack and Sizing John, has attracted a field of eight runners for the 2020 renewal.

The octet includes the Willie Mullins-trained Min, who is bidding to become the first three-time winner of the race since its inception in 1968. Mullins is responsible for half of the field with Allaho, Melon and Tornado Flyer forming a formidable team for the champion trainer. 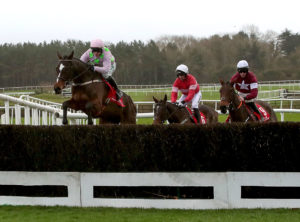 Paul Townend guides Min over a fence on the way to the horse winning the John Durkan for the second successive year at Punchestown in 2019. He will be out to make it a hat-trick on Sunday
Photo: ©INPHO/Bryan Keane

Gordon Elliott, who won the race with Don Cossack in 2014, also holds a very strong hand this time around with Battleoverdoyen and Samcro set to lock horns for a second time in just over a month.

Battleoverdoyen got the better of his Cheltenham Festival winning stable companion at Down Royal on their seasonal reappearance and Elliott is looking forward to targeting more Grade 1 success at Punchestown.

“From the minute Battleoverdoyen crossed the line in Down Royal, it was always the plan to come to Punchestown for the John Durkan,” Elliott said on Friday morning.

“He’s in good form and he has improved from his first run at Down Royal but he’ll need to improve for a race like Sunday as he steps into open company for the first time. He won a bumper at Punchestown, he won a novice chase here last season so he likes the track and the trip suits him so we are looking forward to it but he’ll have to be on top of his game.”

Elliott has won four of the five Grade 1 races in Ireland this season and his hand on Sunday is further enhanced by Samcro, although the trainer himself acknowledges not all factors will suit the eight-year-old.

“Samcro would prefer better ground,” Elliott said. “He just made a mistake at the wrong time at Down Royal and the lack of a run just told against him then. He has definitely come forward for Down Royal but maybe he is a horse that comes to himself in the spring of the year now. The better the ground, the better we’ll see Samcro but I’m happy with him going into the weekend and looking forward to running both of them again.”

Joseph O’Brien will welcome the long-absent Le Richebourg back on track as the highly promising seven-year-old is set to make his first start since winning the Irish Arkle at the 2019 Dublin Racing Festival.

The Henry de Bromhead-trained Chris’s Dream went down narrowly to The Storyteller at Down Royal last time out and his jockey Robbie Power is hopeful his new normal will pay dividends on Sunday.

Power was forced to make the difficult decision to base himself in England this season due to travelling restrictions in place caused by the pandemic.

Punchestown’s fixture on Sunday will be Power’s second visit home in a week after he returned for Fairyhouse last Sunday and he’s hopeful of going narrowly better on Chris’s Dream then when he last paired up with the eight-year-old.

“Chris’s Dream ran a blinder at Down Royal and I wouldn’t swap him on Sunday,” said the leading jockey.

“It’s always good to get the opportunity to come back and ride good horses and the slight easing of restrictions this week now means I can come back for any graded races and not just Grade 1 races so hopefully I’ll be able to make the most of any opportunities that arise.”

Power, who won the John Durkan Chase on Sizing John in 2017, is hoping to help Henry de Bromhead win the race for a first time.

“Chris’s Dream won the Red Mills Chase at Gowran Park last season over two and a half miles and he travelled very strongly at Down Royal so I don’t see any negative to him dropping back in trip this weekend. The horse that beat him (The Storyteller) at Down Royal had match fitness which we didn’t have but Chris’s Dream ticks all the boxes on Sunday and now he has had a run under his belt which some of his opposition won’t have.”

Of his move to base himself across the water, Power added; “I’d be lying to say it was an easy decision, it certainly wasn’t, but this has been an extraordinary year and the commute I was able to do last year by basing myself in Ireland and going over to ride for Colin Tizzard two or three days a week isn’t possible at the moment and it’s as simple as that.

“I have a wife and a daughter at home and it’s difficult to be away from my family but Colin has a lot of ammunition and I felt that was where I needed to base myself while the restrictions are the way they are. We have to just get on with it and hopefully things will ease again shortly in the new year.”

Also on Sunday, a field of eight will line up for the Voler La Vedette Mares Novice Hurdle. Mick Winter looks to have another nice horse in his care with the Trevor Hemmings-owned Sayce Gold stepping up to listed company after two impressive victories last month.