FORMER Leinster GAA chairman and GAA President candidate Jim Bolger was elected as the new chairman of Carlow GAA at County Convention, which was held remotely over Zoom tonight.

The view of a very different Carlow GAA Convention

The Clomore clubman defeated his opponent Liam Foley by 72 votes to 13.

Bolger replaces Sean Campion, who takes over from the departing Cormac O’Toole as treasurer after a five year spell as chairman, and immediately got to work by asking the executive committee to stay on the Zoom call after Convention had concluded for the first meeting of his tenure.

In a brief address following his election, Bolger first of thanked his opponent for running, saying ‘competition is healthy’, and also thanked the outgoing chairman.

“It’s a special day for my family, and also my club Clonmore,” said Bolger, who also thanked the clubs who voted for him, and those who didn’t, and said he looked forward to working with all for the betterment for Carlow GAA.

He said two of the key aspects that he wants to bring to the role are respect and team work.

“Clubs and county board should work together in a spirit of respect. I believe we can achieve a lot if that is the case,” said Bolger. 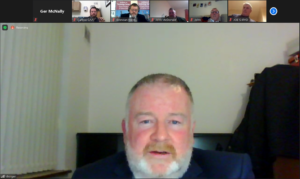 One of his first job is to find a successor for Colm Bonnar as manager of the senior hurling team with the National League now looking likely to start on the third weekend of February. Promotion will be the aim for the new manager, and also for Niall Carew and the football team in his first full year in charge.

Bolger said he would like the completion of a complex at the training centre in Fenagh that all the county can be proud of during his term.

He also intends to meet with the clubs in the very near future to discuss the compilation of a strategic plan that will set out the future ambitions of Carlow GAA.

“What kind of Carlow GAA would you like for the future? What are the challenges?” were some of the questions that he threw out to get the creative juices flowing among the club delegates.

The election of Bolger came at the end of a Convention that ran for approximately 90 minutes. The only other vote on the night was the position of Carlow GAA President after Pat O’Brien completed his three years in the role. Two men were up for the position and it was Tommy Murphy who won out the vote ahead of Liam Barry by 64 to 21.

Murphy praised his friend over 60 years for running for the position and said their friendship will continue.

Cormac O’Toole delivered his last report as treasurer after completing his five years in the role and delegates expressed their satisfaction with the financial results following a difficult year.

Sean Campion completed his last meeting as chairman by wishing delegates and their families a very happy Christmas and said that he hopes for a better 2021 when supporters can get back out supporting their club and county.

A more extensive look back at 2020 Convention will appear in next week’s Carlow Nationalist, which is out on Monday 21 December.