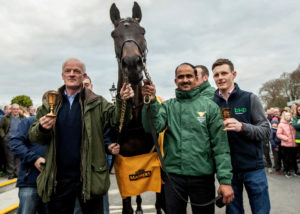 AL Boum Photo has been named as Horse of the Year at the annual HRI awards this morning.

Normally a gala event, the Covid situation meant that the awards were held remotely but that won’t lessen the honour for the Willie Mullins trained horse.

Al Boum Photo won the Cheltenham Gold Cup for the second consecutive year last March in a thrilling race. Jockey Paul Townend judged the run to line perfectly to just about finish ahead of the strong running Santini.

Speaking from her home this morning, owner Marie Donnelly told awards presenter Gary O’Brien of her joy at winning the award and thanked Willie Mullins and all at Closutton for the work they do with the horse. She went on to describe how she viewed the race.

“I couldn’t watch the race, for some reason I was so nervous. We watched on the stand with everybody else and I was sort of facing the wall rather than watching the race. It really meant so much to my husband, we’ve been together for 50 years and I never realised that his great ambition was to own a champion horse, and he did it with the help of Willie (Mullins) and Paul (Townend).

“David Casey helped me lead the horse in which was a little terrifying because is obviously excited. When Paull jumped off the horse he just said I’ve no idea what happened, he was so happy, it really was wonderful for himself and Willie. We’re just over the moon,” she said.

Unfortunately Covid meant that Al Boum Photo didn’t get the same welcome home as when he did when he arrived in Leighlinbridge after winning the 2019 renewal of the race. But who knows, perhaps he will get that welcome in 2021 after a hat-trick of Gold Cup wins. Certainly, that’s what Mullins is aiming for. Al Boum Photo is expected to have his by now traditional first run of the season at Tramore on New Year’s Day and he will have the same build up as in previous successful years before running at the Cheltenham Festival.

Elsewhere in the awards, for his terrific handling of Princess Zoe, Tony Mullins was named the winner of the Flat Achievement Award.  The five-year-old made huge strides after her success in the Ladies Derby at the Curragh, winning two hugely significant handicaps at the Galway festival, returning to Ballybrit in September to land the Listed Ardilaun Hotel Oyster Stakes and then giving Mullins his greatest day when winning the Group 1 Qatar Prix du Cadran at ParisLongchamp on Arc weekend, a truly memorable success under Joey Sheridan.