Byrne back in contention for Christmas clash with Munster

ED Byrne is expected back in training for Leinster this week and should be available for selection for the St Stephen’s Day clash with Munster in Thomond Park, kick off at 7.35pm. 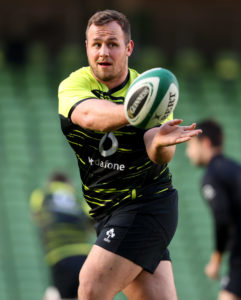 Ed Byrne is expected to return to training for Leinster this week
Photo: ©INPHO/Dan Sheridan

Byrne picked up a troublesome calf injury at a particularly awkward time. He made his international duty against Italy in the Six Nations and again featured from the bench in Paris against France.

He won his third cap against Wales in the first of the November series games against Wales but then got injured the week before Ireland’s game against England. It was a real pity for Byrne because he was pushing hard at that stage for his first international start, if that didn’t come against England then it surely would have against either Georgia or Scotland if he had been available.

The injury then kept Byrne out of Leinster’s Heinken Champions Cup wins over Montpellier and Northampton Saints earlier this month.

Once back on the training pitch this week, Byrne will look to put that injury behind him and pick up in the same kind of form that he was in before it struck, and where better to start than away to Munster.

Jack Conan also returns to training this week after his neck injury but Leo Cullen has a number of niggling injuries to contend with elsewhere in his squad. Rhys Ruddock, Harry Byrne and Jimmy O’Brien all picked up knocks of varying degrees during the win over Northampton and will have to be assessed this week before a decision can be made on their availability. Johnny Sexton (dead leg) and Caelan Doris (calf) are also carrying minor injuries but haven’t been assessed this week as they are on a week off.