In 2021, for the first time since the Tommy Murphy Cup was last played back in 2008, Carlow footballers can begin the season with genuine aspirations of winning a national championship. 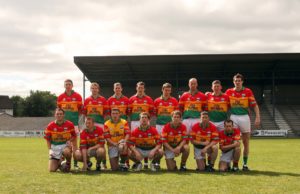 The Carlow team before the 2006 Tommy Murphy Cup semi-final against Leitrim in 2006
Photo: ©INPHO/Cathal Noonan

The Tailteann Cup, which was shelved in 2020 due to playing window restricting because of Covid, will take place in 2021 and unless Carlow reach the Leinster Championship final they will be one of the teams in the competition in the inaugural season.

It would be fair to say that the decision to bring a second tier into the All-Ireland Football Championship has not been met with universal approval. Former Carlow manager Turlough O’Brien was one of the most vocal and consistent opponents of the new competition. It is true that once the Tailteann Cup comes in that Carlow won’t get the chance to welcome Division 1 or 2 teams to Netwatch Cullen Park for a Qualifier tie, like Monaghan in 2017 or Tyrone in 2018.

However, realistically, as great occasions as they were, and Carlow were far from disgraced in either game, were they matches that Carlow ever had a chance to win? Would the same colour and atmosphere not be brought to Carlow for a Tailteann Cup semi-final with a place in a Croke Park final at stake? Sure, we see shocks from time to time and you only have to look to last month’s Championship wins for Cavan and Tipperary to see what is possible but is it right to base the Championship structure on the possibility of these once in a generation victories?

Anyway, days will still be possible under the new structure. One of the biggest aims for Niall Carew as he sets out on his first full year in charge will be promotion from Division 4 and to establish Carlow in Division 3, days like the famous like the famous wins over Kildare in 2018 will still be possible in the Leinster Championship but now after exiting the Provincial Championships instead of hoping to be guests as one big guns roll into town for a turkey shoot, Carlow can realistically aim to win a national championship.

Carlow will get out of the Tailteann Cup what they put into it. In 2006 the team made the Tommy Murphy semi-final but in 2007, after losing in the Leinster Championship, a severely weakened Carlow side played Waterford and suffered a humiliating 8-10 to 0-7 defeat. That sort of defeat could happen any team if they don’t approach the Tailteann Cup in the right frame of mind.

Colm Bonnar left his post as manager of the Carlow hurlers, leaving behind wonderful memories of Christy Ring and Joe McDonagh cup wins at Croke Park, would he be as fondly remembered in Carlow if there were no tiers in the Hurling Championship and he had no medals? I doubt any player on those Carlow teams, or those on earlier Christy Ring Cup wins, considers their medal any less worthy just because they weren’t pitched in with Limerick, Kilkenny or Tipperary.

That’s not to say that a new tiered Championships will solve all the GAA’s woes. There are still huge issues regarding the distribution of funding and you could accuse the GAA of forgetting about hurling to a certain extent in the counties in the lower tiers. It is vital that counties competing in the Tailteann Cup don’t become forgotten about in a similar manner and that is a drum that the respective county board’s need to be banging at the door of Croke Park if it ever happens.

The media has a part to play too and while local media like ourselves will always give extensive coverage to our county teams no matter what level the teams are playing at, it is important that the national media don’t forget this competition – but that is not the be all and end all of things. The Sunday Game paid no attention to the lower tiers of the Hurling Championship until the finals, not even going through the results, but I was in Croke Park last month to see Donegal win the Nicky Rackard Cup and Kildare win the Christy Ring Cup and they did not care one bit about that as they gleefully celebrated on the pitch. Antrim players didn’t seem bothered that the group stage results of the Joe McDonagh Cup weren’t read out on the RTE news as they lifted the trophy in Croke Park.

They celebrated with such gusto because they won those Championships with the same effort, determination and sacrifice that a team needs to win any Championship. The first winners of the Tailteann Cup will have all to show all those qualities, and more again. Carlow should do their utmost to ensure it’s them.