Carlow’s links to the Niemba ambush 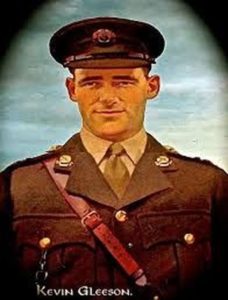 SUNDAY 8 November 2020 marked the 60th anniversary of the Niemba ambush in the Belgian Congo, when nine Irish United Nations (UN) peacekeeping soldiers were killed – an event that had tragic connections for Co Carlow and neighbouring Kilkenny.

Lieutenant Kevin Gleeson from Goresbridge, Co Kilkenny, just across the county boundary with Carlow, was patrol commander and the first Irish soldier killed in the engagement with Luba (Baluba) tribesmen in Niemba, Katanga on Tuesday 8 November 1960. Lt Gleeson (30) was a married man with a six-year-old son.

Private Michael McGuinn from Staplestown Road, Carlow, a member of the 33rd Battalion, 2nd Field Engineering Coy, also lost his life in the ambush. The 21-year-old army private was a married man and news of his tragic death cast a gloom over the county town and particularly in his native Baltinglass – Pte McGuinn was from Parkmore in the west Wicklow town. 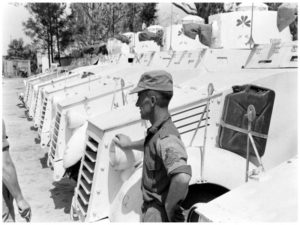 The other Irish peacekeeping soldiers who died in action were all from Dublin.

Both Lt Gleeson and Pte McGuinn were members of the 33rd Battalion, 2 Field Engineering Corps, based in Clancy Barracks, Dublin.

The deaths of the nine Irish soldiers on UN duty was a cause of national mourning when the news broke, bringing home to the people of Ireland the tragic outcome of a conflict being waged 4,000 miles away in central Africa.

Following the ambush, the nine soldiers bodies were flown home to Baldonnel Aerodrome outside Dublin, where they lay in state. Lt Gleeson’s coffin was placed on a gun carriage, while the coffins of the other soldiers, including that of Pte McGuinn, were placed on army trucks.

Thousands of people thronged the streets of Dublin for the funeral cortège in one of the biggest shows of emotion ever seen in the capital. The brave Irish soldiers were buried in Glasnevin Cemetery.

It was after the Belgian Congo became independent in 1960 that civil war broke out in Katanga, the southern, mineral-rich province of the country. A separatist movement, fuelled by mining interests, sought to continue control of the resources in the region. Moise Tshombe, a local political leader, declared Katanga an independent state.

The background to the Niemba ambush was that on 8 November 1960, the Irish patrol of 11 men was sent to effect repairs to a damaged bridge over the Luweyeye river near the village of Niemba. They were forced to leave their vehicles when they encountered a blockade on the road. While clearing it, they were met by about 100 Baluba militiamen armed with bows, poison-tipped arrows, spears and clubs, along with some guns.

While the Irish troops had arrived to protect the Baluba, the militia appeared to take them for Katangese mercenaries. Lt Gleeson, advancing unarmed with his patrol sergeant Hugh Gaynor, attempted to greet them peacefully, but was hit with a barrage of poison-tipped arrows.

Lt Gleeson and 27-year-old Sgt Gaynor from Blanchardstown, Dublin were overtaken, beaten and hacked to death.

The surprised Irish soldiers, who had not been deployed in a defensive formation after dismounting their vehicles, retreated behind trees on either side of the road and opened fire on the tribesmen with their Gustav submachine guns, Lee-Enfield rifles and Bren light machine guns.

The Baluba, however, advanced on them and the Irish were cut off from their vehicles. Despite taking heavy losses, the Baluba over-ran the Irish soldiers and fierce hand-to-hand fighting ensued, during which most of the Irish troops were killed. The survivors regrouped by a ridge, but were surrounded by the Baluba. The Irish soldiers fought to hold them off, but their position was rapidly over-run, and all but three of the unit were killed. Twenty-five Baluba tribesmen were killed.

Trooper Anthony Browne, aged 20, from Rialto, Dublin, survived the initial attack but was subsequently killed. His body was not recovered until November 1962. Trooper Browne was posthumously awarded the coveted Military Medal of Gallantry, the Irish defence forces’ highest military honour, for his courage during the ambush.

The Baluba had long been associated with acts of cannibalism. As a result, the world ‘Baluba’ entered the Irish lexicon as being synonymous with ‘savage’.

The Kevin Gleeson branch of the Organisation of Ex-Servicemen and Women (ONE) in Carlow erected a commemorative stone to Lt Gleeson and his eight fallen comrades. The memorial, located beside Hanover bridge in Carlow town, was ceremonially unveiled by Carlow ONE on 30 September 1990. 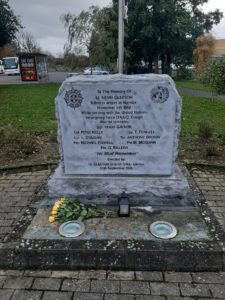 The Niemba ambush memorial, located beside Hanover bridge in Carlow town, was ceremonially unveiled by the Kevin Gleeson branch of the Organisation of Ex-Servicemen and Women on 30 September 1990

Kevin Gleeson was educated by the De la Salle Brothers in Bagenalstown – his father Michael Gleeson, a native of Co Cork, was a garda sergeant stationed in Goresbridge.

On 7 November 2010, minister for defence Tony Killeen unveiled a memorial to Lt Gleeson in Knockraha, east Cork. The memorial was erected by the Knockraha History and Heritage Society.

Patrick McGuinn attended the national school in Baltinglass, today’s Scoil Iósaf Naofa. There was a blessing ceremony and the national flag flew at half-mast for the unveiling.

In June 2015, a plaque dedicated to Private McGuinn was erected by the community of Baltinglass on the front wall of Scoil Iósaf Naofa. The plaque stated he was ‘killed in the service of peace’. The plaque was supported by Pte McGuinn’s family.

The plaque was unveiled by Pte McGuinn’s son, also Michael, who was accompanied for the occasion by his son Laurence.

UN and Irish Army representatives were present, including a number of Carlow members of the Irish United Nations Veterans’ Association (IUNVA).

In 1961, the 1st Irish Infantry Group Congo, which served in the central African country from May to November 1961, erected a commemorative concrete cross at the location where the Niemba ambush occurred. A number of soldiers from Carlow were in that 1961 UN contingent.

Another Carlow connection to the Congo conflict was the fact that Thompson Engineering, at its Hanover works in Carlow town, provided Ford chassis and mounted light-armoured bodies to the Irish Army, which were used by Irish units in the Congo. Thompson’s also built the Thompson Ford Armoured Car, showing UN colours, used for service in that African conflict.

An article on Thompson Engineering, Hanover Works as part of Carlow County – Irish Genealogical Projects, written under the pseudonym ‘Carlowman’, disclosed that the Thompson armoured cars were patterned generally after the Rolls-Royce armoured car. They consisted of a plated superstructure mounted on an ordinary Ford or Dodge lorry chassis, which had to be shortened.

The interesting part of the car was the rotating turret with its slung seat for the gunner and its heavy Vickers gun, ball-mounted to swivel in all directions, including upwards against air attack and steeply downward to repel would-be boarders.

Thompson’s turned out 46 of these vehicles and some of them were brought into action during the battle of Elizabethville and in other parts of the Congo in 1961, forming part of the equipment of the United Nations force.

Historically, the Belgian Congo was named Zaire from 1971 to 1997, before being renamed Democratic Republic of the Congo, today’s title for the country.

As a point of military interest, the Niemba ambush was the first time the Irish Army was engaged in conflict since this country’s Civil War of 1922-23.