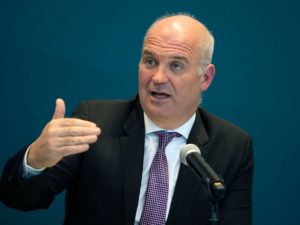 PHYSICIAN Tony Holohan, the steady hand at the tiller as chief medical officer with the Department of Health in the current Covid-19 crisis, has strong family connections with Carlow town and the Carlow/Kilkenny area. The Holohan family originally hail from Coon, Co Kilkenny, just over the county boundary with Carlow, and a number of Tony Holohan’s nephews and nieces reside in the Carlow/Kilkenny area.

Dr Holohan has become the country’s best-known medic since the pandemic hit this country in the spring, with the Irish people hanging on his daily news conferences on RTÉ television as he leads the nation’s fight against the dreaded coronavirus.

Having taken off a number of months in early July to care for his ailing wife, Dr Emer Feely, Dr Holohan returned to his duty as CMO in October. There was a national outpouring of sympathy for Dr Holohan in his dilemma and he was described in the media as ‘a rock’ and ‘a patriot’.

At one stage during the early months of the health crisis, Dr Holohan felt unwell during one of television broadcasts and was later admitted to St James’s Hospital. He underwent some hospital tests not related to Covid-19 and was at work a few days later.

In early October he returned to duty, taking over from his deputy in the HSE, Dr Ronan Glynn, who himself had become a household name.

Tony Holohan, a father of two, was born in Dublin and educated at secondary level in Sexton Street CBS School, Limerick after his garda father Liam was transferred from Garda Headquarter in Phoenix Park, on promotion as sergeant to the Treaty city in 1975, serving in the city’s Henry Street station.

Aged 52 and one of six children, Dr Holohan is a 1991 medical graduate of University College, Dublin. After training in general practice, he also trained in public health medicine. He was appointed deputy medical officer with the Department of Health in 2001 and promoted to chief medical officer in December 2008. He is regarded as a leader in the field of evidence-based public health medicine in Ireland.

Dr Holohan has worked in the areas of policy development in cancer control, primary care and health information.

The late Bob Holohan, Tony’s uncle, who lived on Tullow Road, Carlow, was a highly-regarded woodwork teacher with Carlow Vocational School (VEC) when the school was located at the town’s Dublin Street. Bob’s late wife, the former Kathleen Darcy, was from Coon East.

As the most senior government adviser on health, he holds a key role in the country’s health policy and helps to guide the government’s response to medical and health crises.

In September 2019, I interviewed his father Liam Holohan for the Carlow Town Hurling Club book 50 Years of Hurling. Liam, who retired as a garda sergeant in 1990, resides at Maiden Hill, Kells Road in Kilkenny city with his wife, the former Brigid Ryan from Cappamore, Co Limerick.

Liam completed his secondary education at Carlow CBS, having earlier been a student at St Kieran’s College, Kilkenny. He played minor hurling for Carlow in 1956 and 1957 and lined out at junior hurling level with The Pearses in Carlow town, forerunner of Carlow Town Hurling Club. He returned to his roots in 1967 when lining out for Coon in the Kilkenny junior championship.

Among his GAA collection are two medals won with The Pearses in 1957, when the under-18 side from the county town claimed the Carlow county championship and league double.

Liam served in Bailieborough, Co Cavan and Hollyfort, Co Wexford, Howth, Co Dublin and Garda Headquarters before being transferred to Limerick. He won a Cavan senior football medal with Bailieborough in 1964.

That Bailieborough team had Co Carlow connections. Brothers Tom and Bernard Reilly played with Liam Holohan on that team and left Cavan to work in Duffy’s of Hacketstown as young men. They were quickly enlisted to play football for the local Clonmore GFC and were members of the Clonmore team that clinched back-to-back Carlow senior football championship titles in 1955 and 1956. Bernard, who went on to become a priest, was a fine midfielder, while Tom played at corner forward.

Eighty-one-year-old Liam Holohan is the youngest of 11 children and has three surviving siblings: Tom (Tullow), Paddy (Callan) and Sarah Hearns, who lives in Dublin.