CHACUN Pour Soi and Appreciate It completed a quickfire Grade 1 double for trainer Willie Mullins and jockey Paul Townend at Leopardstown today but the races weren’t without their controversies. 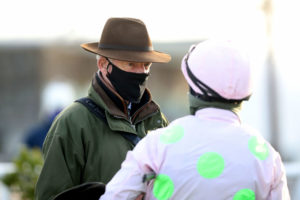 Due to safety fears over low sunlight at the track, certain fences weren’t jumped and speaking to the media after Chacun Pour Soi’s impressive win, including The Nationalist’s Kieran Murphy, Mullins expressed his dismay at the decision.

“I suppose safety is paramount. However, horses have been jumping in sunlight forever, why is it such an issue now? I don’t know. Some day’s the racing is ridiculous, it’s like flat racing with a couple of fences thrown in the middle. It’s a dangerous game, it’s a risky game every day you go out,” said Mullins.

Mullins said that trainers’ thoughts on the issue aren’t taken on board before the decision is made.

“I don’t know how it comes about, we are never consulted anyway. I don’t know it came about but it’s getting beyond ridiculous now at this stage. However, when they jumped the second last there I wasn’t complaining,” said Mullins, with a smile.

In this day and age, when so much information regarding horses is disclosed before races, Mullins queried is it right that racing conditions can be changed so significantly.