THIS year O’Hanrahan’s celebrate the 20th anniversary of their Leinster senior football championship final victory when they beat the reigning provincial and Dublin champions, Na Fianna, in the final in Portlaoise on Sunday 3 December 2000. 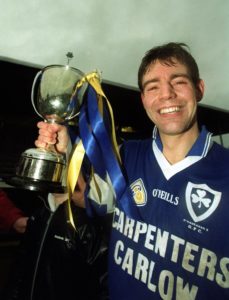 It was an amazing victory for what would be considered a small club from the second smallest county in Ireland taking on and beating clubs during the campaign who can draw from far bigger and richer resources.

What probably made it all the sweeter was they stepped out of the shadow of arch-rivals, Éire Óg, who had won five Leinster titles from 1992-1998. In fact, The Blues beat their town rivals in the 1999 county final to put a stop to their great run and then repeated the feat in the 2000 decider.

How they did it is not a mystery. The club won an intermediate title in 1997 but more importantly O’Hanrahans won four under 21 football titles in a row from 1997 to 2000. Many of those guys would have played on the victorious minor teams of 1995 and 1996.

JJ Lambert was a senior selector in 2000 while he had managed the under 21s as well.

“Anyone could have managed them. They were great sides,” he said.

With Lambert at the helm for the seniors in 1998 the club had come close but lost to Rathvilly narrowly in the senior championship. He had a decision to make.

“At the end of the year the club said they were happy with the way things were going.

“You need an outsider. You need someone who is good.”

He was friends with former Laois footballer, Bobby Miller, who had led Éire Óg to an All-Ireland final in 1993. Lambert was advised by Miller to go and have a chat with Mick Dempsey of St Josephs.

“Myself and John McDermott went out and met him in Pedigree Corner. We had lunch with him out there,” recalled Lambert.

The duo wore suits, were well dressed and looked the part. They behaved in a professional manner and while Dempsey admitted he knew little about the club, he was impressed by the approach.

Nothing was decided that day. A week later the pair met Dempsey once more. This time some of the players came as well. Pedigree Corner was their point of contact.

According to Lambert, Dempsey burst out laughing when Lucozade was ordered for the players.

“Give the boys a drink if they want one,” he said. 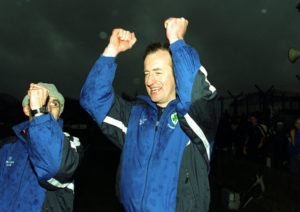 Manager Mick Dempsey at the end of the Leinster final
Photo: ©INPHO/Andrew Paton

At the time, the O’Hanrahans grounds were undergoing refurbishments. Lambert approached the rugby club and they trained there for six weeks before moving back home.

They played a league game against Éire Óg on St Patrick’s Day beating them in what was a rare victory for The Blues. The new coach liked what he had.

“I remember Mick Dempsey locking the door and telling the boys he had something to work with,” said Lambert, who remembers clearly what Dempsey said to his players and what he brought to the club.

“I saw some lovely footballers out there. You are a big side and you can go a long way. But, you have to do everything I ask you to do.”

To this day, Lambert holds Dempsey in the highest regard.

JJ and Anthony Kavanagh acted as selectors alongside Dempsey in the glory years.

After winning the county title in 1999, the Carlow champions gave a hint of what was to come when only losing to Sarsfields of Kildare away from home by 1-11 to 0-13 in the first round of Leinster.

“We were eight points down at one stage. With a few minutes to go, we were back within a point. We finished the game with about eight or nine under 21s. We were a young team against a side who had Niall Buckley and about seven or eight players who were on the Kildare team.

“In the end, John (Sausage) Brennan, had a 45 to level. All I was thinking if we could get them back to Carlow we would beat them. We were very fit,” said Lambert

If there was a professional approach taken to the recruitment of Mick Dempsey then the players were treated the same way.

“We used to plan and plan. John McDermott (RIP) was in with us at the time. He was a great addition as he was very organised and very professional.

“We had great support. Everyone got behind us. John McDermott did great work. We had hot food in Carpenters after training every night. “Lads coming from work and studying in Dublin were looked after. The atmosphere was absolutely brilliant,” related Lambert. 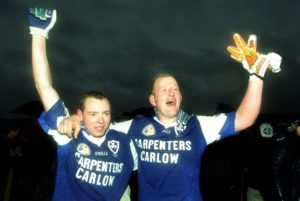 Gavin Walker and Alan Bowe celebrate at the end of the game
Photo: ©INPHO/Andrew Paton

Ultimately, the journey through Leinster was a victory for self-belief, commitment and above all else a victory for a hugely talented group of individuals who let nothing stop them in their quest for victory.

Hardly anyone bar themselves saw it coming. Particularly on the morning of the final. Hours before the throw-in Lambert was worried and said as much to Dempsey.

“I said to Mick, I hope things don’t go really wrong for us and we get scutched. He said to me straight up we are going to win.

“No,” he said. “We are going to win. The attitude is great here. Everyone is training hard. Everyone is very positive and everyone is up for it.”

O’Hanrahan’s even had to cope without the services of the suspended Mark Carpenter as they faced into the wind in the first half. When Na Fianna turned around with just a two point lead, the chances of an upset had increased massively. The underdogs duly hit 1-5 without reply in the third quarter and their supporters in the 4,500 crowd were celebrating before the final whistle. History was made. 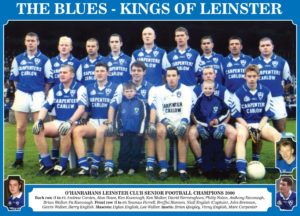 The O’Hanrahans squad ahead of the 2000 Leinster final

THE ROUTE TO A LEINSTER TITLE

The Kilkenny side took an early 2-1 to 0-0 lead, before the Carlow champions came back in style, shooting 2-3 without reply, to win a first round tie at windswept Dr Cullen Park.

JJ Lambert’s Recollection: We were training with St Josephs in Knockbeg and Dempsey was involved with them. Around that time he was also training Muckalee in Kilkenny. Amazingly, he won three championships in three different counties.

I said to him what happens if we meet with one of those teams in Leinster. I am staying with The Blues he said.

The battling qualities of O’Hanrahans, and centre-forward Pa Kavanagh in particular, were well in evidence in Dr. Cullen Park, as they came from eight points adrift 2-6 to 1-1 at half time to salvage a draw with the Westmeath champions.

In a tough encounter, which went to extra-time, the Carlow champions O’Hanrahans advanced to the Leinster semi-final. With the advantage of a strong breeze in the first half, The Blues looked the superior side, but inaccuracy in front of goal saw them ahead by just 0-4 to 0-2 at the break.

The Westmeath champions slotted over five unanswered points in the opening 20 minutes of the second period to go two points clear. However, O’Hanrahans were then awarded two penalties in two minutes. Pa Kavanagh shot the first one wide, but Gavin Walker converted the second. Coralstown-Kinnegad refused to wilt and a David Flynn brought the game to extra-time.

From there, a fitter looking O’Hanrahans raced into a three-point lead, only to see the losers hit back with an excellent Andrew Cannon goal. Gavin Walker won it for The Blues with a point two minutes from the end.

JJ Lambert’s Recollection: We drew with them in Carlow and beat them up there. Marc Carpenter was sent off. Retaliation. He wouldn’t be dirty and he was getting a lot of hardship. The two days we played them it lashed both days.

Andrew Corden was going to Spain and we took him off at half-time. He didn’t want to come off. Vinny English came in and did a great job.

A strong breeze favoured the Carlow champions in the opening half but they only led 0-6 to 0-4 at the interval. On the changeover, Moorefield, quickly drew level but could never kick on decisively.

Five minutes from time, the Kildare side edged in front but O’Hanrahan’s levelled with a point from Pa Kavanagh from a free and a minute later a superb point by Brian Walker regained the lead and gave them a place in the final.

JJ Lambert’s Recollection: We were trailing by a point near the end and Pat Kavanagh got a point near the end to level the game. We got a line ball near the corner flag. We were playing against the wind. Brian Walker had a shot from an acute corner and bent the ball over the bar From the corner and against the wind. I remember someone asking me did he mean that and I said yes. I remember him doing the same thing for Carlow in a league match against Waterford in Dungarvan. Brian had fierce confidence in himself but could always get a score when you wanted it.

Playing into the wind in the opening half the Carlow side trailed 0-4 to 0-2 at the interval but by the 47th minute they had taken a 1-7 to 0-4 lead with Brian Walker grabbing a vital goal. Na Fianna hit back and an Aaron Shearer three-pointer cancelled out Walker’s effort. In the end, the Carlow side prevailed and were convincing winners in the end.

JJ Lambert’s Recollection: It wasn’t as close as that. We were never in trouble, I felt. We had a plan and it worked very well. If you look at that match – Dessie Farrell never scored. Jason Sherlock never scored. Kieran McGeeney was playing. They had players from other counties and most of them were intercounty. They were good footballers, don’t get me wrong, but they wouldn’t have had the same team spirit we had.

This article, by Kieran Murphy, originally appeared in the Fireside Companion magazine.