TODAY at Leopardstown, for the second time in less than a month, Patrick Mullins guided home one of the horses trained by his father Willie for a high profile Grade 1 hat-trick win. 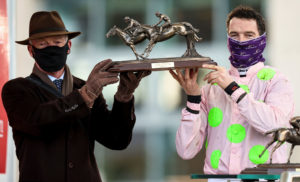 Patrick Mullins and his father Willie lift their trophies after Sharjah’s win in the Matheson Hurdle at Leopardstown
Photo: ©INPHO/Tommy Dickson

Earlier this month in heavy fog at Punchestown, Patrick impressively led Min to a third successive win in the John Durkan Memorial race and he repeated the trick today in the Matheson Hurdle when outsider Sharjah outpaced his more fancied counterparts with a well timed run to the line.

Speaking on RTE before the race, Mullins said that he would let the leaders in the betting like Saint Roi, Abacadabras and Aspire Tower do the early running before coming in one late swoop and that’s exactly how the race panned out.

“It’s easy to ride him like that when you know the turn of foot that he has. He gives you as much as he can on the bridle but he is tough off it as well. We just missed the last and only for that we might have won it a shade easier,” said Mullins.

Stable mate Saint Roi was the favourite before the start of the race and it was in his slipsteam where Mullins wanted to be.

“I thought we went a strong gallop but then we slowed up turning out of the back. My plan was was to track Saint Roi and I was happy with that because I knew he had plenty of speed, and I knew if he slowed up that I had plenty of speed. Turning in tracking Saint Roi, then I’m thinking I’m not getting to Aspire Tower so I had to commit a little earlier than I wanted. To be honest, a strong run two mile suits him because they are coming at him, and a slow run two mile run suits him because he has such speed. He’s just a wonderful horse to ride in these races.

“I thought it would be hard to beat Saint Roi but he loves this place, this is his third year in a row winning it, and it should be four years in a row because he fell at the last four years ago. Horses for courses,” said Mullins.

The Grade 1s are starting to mount up now for a jockey who turned 31 earlier this month but he is just happy to prove his worth, although he did have some regret that he wasn’t able to get Melon over the line in first place in the Savills Chase on the previous day. Mullins said that playing it safe at the second last fence, rather than really attacking it, probably cost him the race.

“Justification is probably the wrong word to use but I just like to justify my place in riding these horses, obviously, being the boss’ son and being an amateur. It’s great today but I’m raging over Melon yesterday, I felt that was one that I might have left behind me,” he said.