IT might be overstating it to say 2020 was a tumultuous year for Carlow sprinter, Molly Scott. Yet away from the pandemic which has made us all reassess the way we live our lives, the 2019 under 23 100m hurdles national champion decided it was time to make some alterations to her way of living.

She changed coaches and moved to Waterford where she trains alongside Phil Healy of Bandon Athletics Club, who is the current Irish 100m and 200m record holder. That would seem like a good move. They are both trained by Shane McCormack.

Considering, that for all her athletics career, Molly has been trained and mentored by her mother, Deirdre, at their home near Hacketstown there had to be huge emotional strings attached to the decision. Happily it was a joint initiative and as altering something major in one’s life Molly says this was an easy transition.

“I think we are both happy. She is very happy and so am I. She was saying that if I wanted to move on and make changes I had to try it,” says Molly.

“I was 21 and living at home. I needed a life experience as well to learn how to live on my own. It is a big move but I have been enjoying it and embracing it,” the Irish sprinter said when speaking form her new placing in Waterford. 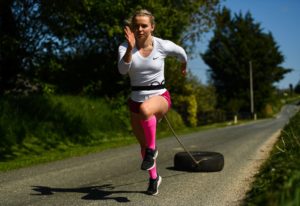 Molly Scott had to get inventive with her training near her home in Carlow during the first lockdown
Photo: Harry Murphy/Sportsfile

At the time the second lockdown meant the athlete and her former coach saw a lot less of each other.

“We stay in touch on Facetime. She (her mother) will still play a big part in competitions and training,” said Molly.

If the move didn’t faze her neither did her new training programme under her new coach.

“I train with Phil (Healy) and I have somebody to look up to where I see here doing this and wonder am I doing it. All the small little things add up,” points out Molly.

“I thought it would be a lot harder adjustment but it hasn’t been. The training is different to what I have done before but it is nice to have training partners. It is nice to have someone whom I am around every day who is doing what I am trying to do.”

Before the first lock down was imposed the Carlow sprinter was in good form.

She took silver in both the 60m hurdles and 60 sprint events at the national under 23 indoor championships in Athlone in January. A fifth place in a quality field at the AIT Grand Prix was decent. Fourth in both the hurdles and sprint events in the Irish Indoor championships at Abbotstown would suggest she was there or thereabouts but perhaps not at her best. In the two months before the lock down she also ran in events in England and France. She also won a silver medal the Irish Universities 60m behind Ciara Neville, her former teammate when Ireland won a world under 20 100 relay in Finland two years previously.

“It wasn’t my best season. I wasn’t running PBs (personal bests) or anything. I was getting ready for outdoors,” the Carlow sports star noted.

The indoor season was winding down in March and everyone was getting ready for outdoor competition. Then in the middle of March came the lock down.

“I was training for a huge summer of athletics. There was Europeans, Olympics. Everyone was very motivated and obviously when lock-down came it just changed everyone’s perspective,” recalled the Carlow sprinter.

Just like so many others, Scott found it hard at the time to visualise what was coming.

“Really, I thought it would be only two weeks and everything would be back to normal. I soon realised that was not going to be the case and it was going to be a couple of months. I adapted my training, trained at home. We had a little stable where I put weights in there and used it as a gym. I used the hills near my house. It was six weeks of very basic training.”|

The first lock-down found so many people just drifting along. Many actually enjoyed the break and not having to run furiously on a treadmill that never stops turning.

“I didn’t realise it then but looking back it was a break from going places every single day and being busy all the time.

“Not knowing what the future was, I enjoyed every single day as it came. I did actually need the break. I think a lot of other athletes felt the same and getting away from the competitive pressure that comes with it. It was a nice time,” admitted Molly.

“Obviously I was in a comfortable environment with my family. I know that is not the case for everyone,” she said.

As time moved on some restrictions were lifted. She got back into competition in July taking part in a graded meeting in Dublin, the summer games in Moyne and the Leevale 2020 meet in Cork IT.

She was pleasantly surprised to be invited to a meeting in Trieste, Italy which took place on 1 August. She was accompanied by her mother who was still her coach at the time.

“The cases weren’t that high. I had a really good time. We did wear the masks and the visors. I didn’t run that well but we enjoyed the meeting.”

She didn’t see that much of Italy but then again international sportsmen and women rarely get to stop off and do a bit of sight-seeing when they compete abroad. It was the same for mother and daughter here.

“We got in about 10 at night time. There were a lot of Covid protocols. We didn’t get through until about 11. It is funny. With athletics you will get on a bus in a random country with people you don’t know who speak different languages. Then you go to the meet,” she explained.

“We drove through Trieste during the night. It was one of the most beautiful places I have seen in my entire life. I only saw it from the mini-bus but it was absolutely stunning. It is a shame you don’t actually get to see more.”

Then of course she could have one of those don’t talk to me moments.

“When you get a bad performance you just want to get on a plane and go home,” she laughed.

She was third in her heat in Trieste which was good enough to get her into the final where she took seventh place.

Three weeks later she took part in the Irish Outdoor Championships in the Morton Stadium in Dublin. She won her 100m heat and took fourth place in the final behind her future training partner, Phil Healy, who finished first. Molly won gold in the under 23 race and a week later on the last weekend of August at the same venue she took bronze in the 100m hurdles. 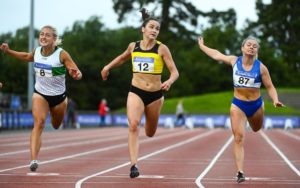 That is where her season stands now. Then came that discussion with her coach at the time and with the blessing of her mother she made the move to Waterford.

“In September my mam felt that if I wanted to progress and get better I needed a change.”

Now a new indoor season is approaching. That all depends on how well Ireland deals with the second lock-down. Molly can only do what she is doing now by applying herself and doing what she loves doing.

“We don’t know if there are going to be any indoor races in Ireland. There might be a few abroad. Everything is up in the air at the moment. I think it all depends on Covid testing and how quickly that can be done,” she reasons.

She says she has no problem motivating herself. She takes a day off on Saturdays while she would have light session on Mondays.

“I am lucky. Motivation is something I have never struggled with at all. Sometimes I might feel I don’t want to do that exercise or do this run but I have never woken up and felt I didn’t want to train at all.”

Now that she has had to get off that treadmill for a spell it has given her the opportunity to reassess on how she approaches issues which crop up.

“When I was younger, I would have got caught up very much on when I had a race next month. What is going to happen? How am I going to do?”

She says she does enjoy life and lives for the moment rather than constantly looking to the future.

“I think that with the sport and the intensity I have had done it at, I found this year a little easier. Every day I have training, I have goals. How am I going to get better? Some people have had that taken away from them this year,” she says.

And as for the future, all athletes will have one eye on possible selection for the Olympics which were postponed this year. Molly is no exception but it doesn’t consume her.

“I have European under 23s next summer. That will be the target for me,” she explains. 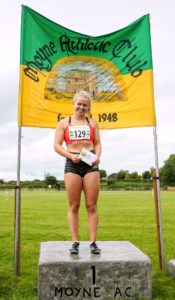 This article, by Kieran Murphy, originally appeared in the Fireside Companion magazine.

Another national title for Marcus Lawler