THERE were no problems for Al Boum Photo as he made a successful first appearance of the season in the Grade 3 Savills New Year’s Day Chase today at Tramore. 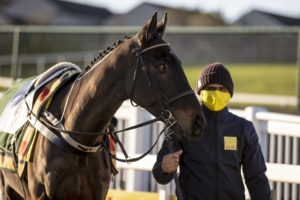 With Paul Townend on board, Al Boum Photo didn’t put a foot wrong and looked majestic as he pulled away from stable mate Acapella Bourgeois after the second last fence to win by a clear margin.

It was the same 1-2 as the running of last year’s race and is the third year in a row that Al Boum Photo has won this race but much more importantly, it puts him exactly where trainer Willie Mullins would want him ahead of a shot at a third Cheltenham Gold Cup in a row at the Festival in March.

The horse has taken the same route to Chelthenham in the last two years, winning at Tramore and then straight to the Festival and Mullins won’t change a winning formula and he remains a rock solid favourite to complete a piece of racing history at the Festival.