IT has been a very frustrating Christmas period for us as all our games in the past week have fallen foul to the poor weather we have been experiencing in Wales. Last Tuesday’s game against Exeter was called off very late because of a waterlogged pitch which I was very surprised about. We live in Newport and the weather had seemed like it was okay all day and I did not think the game would be in doubt but when we arrived at the ground for the game and saw the pitch, we knew the game would be off.

Then on Saturday our game against Southend was called off because the pitch was frozen in some patches. That one was particularly frustrating as the groundsmen had done a wonderful job to get the game on and then the temperatures dropped after they took the frost sheets off and some parts of the pitch were deemed unplayable by the referee. I walked on the pitch before hand and although it was a little bit hard on top, I thought we could have at least tried to play the game, but the referee took that option out of our hands and to be fair to him he had the players’ safety in his mind so maybe he was right. The two postponements now have caused us a big of a fixture headache and now we have to fit 29 games in to the next 15 weeks which is going to be a big ask for us all and we will need to utilise our squad very well now.

We have a break from league action next weekend as we are playing Brighton in the third round of the FA Cup at home. It is a game that we are looking forward to and hopeful that we can add Brighton to our list of recent giant killings in the FA Cup after previous years exploits of bringing Spurs to a replay and beating Leicester, Leeds and Middlesbrough. The game is live on BT Sport on Sunday night, obviously because of our history they picked us hoping for an upset. Brighton have been in a weird run of form at the minute and have not won in eight games but have only lost three of those games as well. Their away form is pretty good too, so it is going to be a difficult game for us. 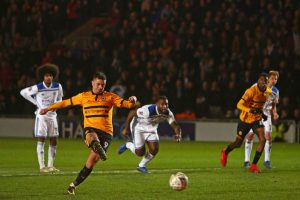 Padraig Amond scores from the penalty spot against Leicester in the third round of the FA Cup in 2019 Photo: Geoff CADDICK/AFP/Getty Images)

They have some very good players at their disposal and one in particular that we are very familiar with and that is Ben White. Ben has been linked to all the top Premier League sides Liverpool, Man Utd, Man City and Spurs and it is no surprise to all of us at Newport as we saw his quality up close when he spent a year here on loan before his loan move to Leeds where everyone started to take notice of him. He was brilliant for us and he loved it at Newport County and sometimes that is not always the case with loan players from Premier League clubs. You get some loan players who are used to the best facilities and the best of everything handed to them and when they drop to lower league teams on loan, they expect it to be easy and to get everything handed to them like their parent clubs, but they quickly realise that its very different. They are out of the academy football environment and in a situation where mistakes are punished, and you end up learning very quickly that every game is important.

When Ben went back to Brighton from Newport after his loan ended, I remember receiving a phone call from the Head of Recruitment of a League 1 team asking about Ben and if I thought he would handle the step up to a League One side because they were thinking of making an offer for him. I have never been surer of a player that I have played with making it to the top as I was of Ben and I told the Head of Recruitment there was no point even trying as he was going to end up on loan at a Championship club on loan that year or play in the Premier League for Brighton and low and behold, he ended up at Leeds United and they won the Championship in the end. The same person called me last summer after Leeds won the league and Ben was named in the Championship team of the year to say fair play for my judgement which was nice and also good for future jobs for me, I hope.

We have nothing to lose this weekend against Brighton and will give it another good lash so hopefully the Newport County FA Cup fairy-tale can be added to and more money can be added to the club’s balance to sign the quality that might be enough to get us through to the end of the season and stay in the promotion places until then.

The Padraig Amond Column appears in the The Nationalist every Tuesday