FORMER Carlow FC rugby player, Tom Daly, produced a stunning performance and scored his side’s final try as Connacht bridged a sixteen year gap when they beat Leinster away from home for the first time since 2004. Their PRO 14 35-24 victory at the RDS on Saturday night was utterly deserved and was a sweet victory for Daly who moved from Leinster to Connacht two years ago. The Ballon sportsman had taken a while to settle in his new surroundings but with four tries in eight games so far this year the inside centre is on the cusp of clinching a regular starting place in the team.

With two tries, three penalties and three conversions, out-half Jack Carty took the Man of the Match award on Saturday but Daly had to be in contention. His ball carries, his tackling and his ability to win possession both in general play and at the breakdown set up his team mates around him who scented victory from an early stage. 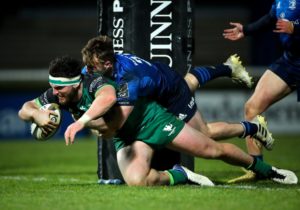 Playing against his former club, there was an bit of extra motivation going into the game. “Over the last few games I have been playing pretty well so I tried to get myself as involved as much as possible. I ended up on the right side of a result which was good,” said Daly.

The 25-5 interval lead for the eventual winners was crucial but that didn’t happen by accident.

“We talked about it all week, about having a fast start. Leinster are such a strong team and the only way to get a result was to go out and attack them and get an early lead.”

It was inevitable the home side would hit back which they duly did. At one stage the lead was down to 28-17. Leinster also had a try disallowed which would have narrowed the gap even further. Connacht read the warning signs, hit back and Daly’s intercept try with eight minutes remaining sealed victory.

“We knew they would have their purple patch which they always do. I knew once we held them and held them up with some good defensive play we were going to win it,” said Daly.

Players tend not to talk about their own individual performance and the Connacht centre was no exception but he did admit he was happy to come back to his old stomping ground and get a significant result.

“I was fairly happy with the way it went. It was good to have a big game against my former club, some of my friends, my former team mates and it was nice to play against Ed Byrne who has been going incredibly well over the last few weeks. It is nice to play against familiar faces. I have made a lot of friends in my time with Leinster and it was good to get one up on them,” he confessed.

While defeat was his lot it was a good night for Byrne who showed he has recovered from a recent injury when he scored Leinster’s final try late on.

On the other hand, Daly is focussing on a regular start for the western province.

Bundee Aki is the man in possession of the number twelve jersey so it is a tall ask for the Carlow man to oust the Irish international player. Performing as well as he is it looks as if he could be accommodated alongside Aki.

“Definitely it is close now. The way I have been playing over the last few weeks. Me and Bundee have played together as well this year and hopefully, for the big games, that is the way it will go now,” suggested Daly.

Connacht will look to reproduce their heroics when they host Munster at 7.35pm.

Meanwhile, following his try scoring return to action in that game, Ed Byrne has again been named among the replacements as Leinster look to bounce back against Ulster on Friday evening in the RDS at 7.35pm.