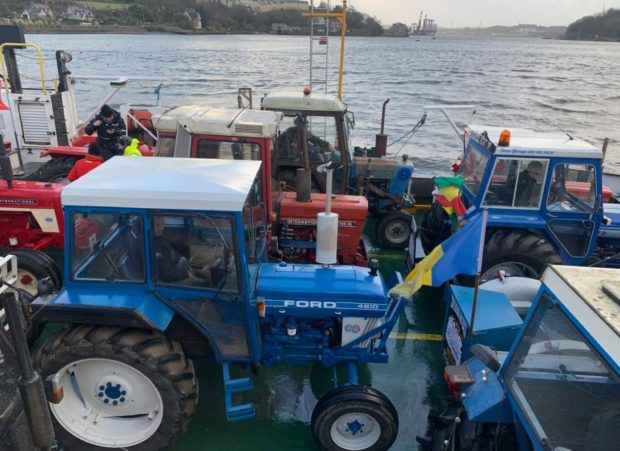 MEMBERS of the Carlow to Cork Tractor Club showed their determination to raise money for charity by once again holding their annual event in the run-up to Christmas. Working within the Covid restrictions and keeping members socially distanced, the club drove their vintage tractors down and back to Cork on Saturday 19 December.

The 17-strong tractor group left Carlow at 3am and arrived in Halfway, Cork at 11.30am. After a brief stop for food, they headed back for Bagenalstown, arriving home at 10pm. There are usually some hiccups along the way, but thankfully this year they were kept to a minimum.

“There were no breakdowns … a couple of issues with flat batteries here and there, but nothing major,” said Brendan.

One driver had a hole in his diesel tank outside New Ross and the running repairs involved a cocktail stick, which worked a treat.

“They said they were going to put a stick in it. I was like ‘what are you talking about?’,” recalled a still incredulous Brendan. “Who brings cocktail sticks on a tractor run?”

Although they were rarely called upon, MJ Farrell, Henry Jenkinson and Keith Whitford provided back-up and breakdown support during the trip.

“MJ stayed behind us all day until we were back in Bagenalstown. That’s something else … to be travelling at the speed we were going, 25kph to 28kph.”

It’s hoped that this year’s event will raise up to €20,000 for the Children’s Medication Research Foundation at Crumlin Hospital, a super achievement despite all the obstacles. There has been an abundance of donations through the club’s website (tractorrun.com) and Brendan highlighted that the videos created by Richie Kavanagh of Garryhill Productions had drawn many to the site.

People can still donate and it is hoped that Covid will not impinge on this year’s run in June.