Amond ready to focus on league after cup heartbreak

FOR the second time this season, Padraig Amond and Newport County endured penalty shoot-out heartbreak at the hands of Premier League opponents on Sunday. 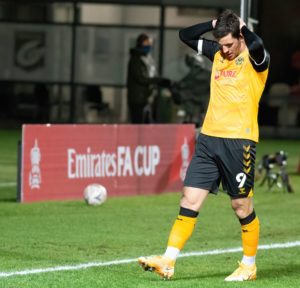 Having lost in a shoot-out against Newcastle Utd in the Carabao Cup earlier in the season, the League 2 promotion hopefuls exited the FA Cup at the third round stage in similar fashion. It looked like Brighton had won the game in the 90th minute when Solly March curled home the opening goal from the edge of the box but in a dramatic finale, Newport forced an equaliser in the fifth minute of injury time to force the game into extra time. Although there were no further goals, the drama continued in the shoot-out. Newport looked on the way when they missed their first two kicks from the spot but goalkeeper Tom King helped haul themselves back into it. At one stage, Brighton needed to score one of the kicks to stay in the competition but in the end it was their goalkeeper Jason Steele who proved to be the hero with four saves.

“It’s just one of those things, once it goes to penalties it’s a lottery,” said Amond.

“It was a good performance from us in a game against a Premier League team, and once again we’ve gone out on penalties, we haven’t actually lost the game. We showed great character to get back and get the equaliser after conceding as late as we did. It’s just disappointing that we couldn’t see the job through, but at the same time we can be proud of ourselves and now we can concentrate on the league,” added the striker. 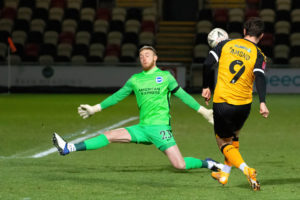 It was a game of fine margins and Amond was left to reflect on what might have been after failing to convert from two very presentable first half chances. Very early in the game, he latched on to a short Lewis Dunk backpass but curled his shot agonisingly past the post. He came even closer later in the half. Goalkeeper Steele got himself in a muddle when coming to the edge of the box to clear, allowing Amond a difficult shot at an empty goal from outside the area but Dunk made up the ground to clear the ball off the line. Unfortunately for Amond, it was one of the tallest players in the league who was making up the ground to prevent him from adding to his 12 FA Cup goals.

“I actually said that to him afterwards,” said Amond. “If it was one of the other defenders they might not have reached it. To be fair to him, he did brilliantly to get back. If he wasn’t 6’5, 6’6, it could have been a different story and we might have been in the draw on Monday. That’s football, things like that happen and that’s why he is a Premier League defender, he can see the mistakes about to happen and get back to make and make a clearance that he probably had no right to make,” said Amond. 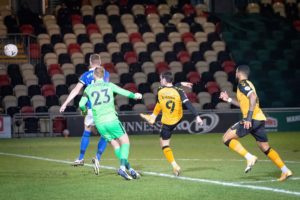 Amond shoots from the edge of the penalty area but Lewis Dunk got back to clear this effort off the line
Photo: @nicnacnoopixs

Although the defeat brings an end to Newport’s cup interests for the season, they still have plenty to play as they as just one point behind League 2 leaders Carlisle Utd with a game in hand. However, the rising Covid cases in the UK have once again cast doubt over how the season will be completed. On Monday, it was announced in Scotland that all divisions below the Championship have been suspended for three weeks. Amond is hopeful that the same thing won’t happen in the English leagues but knows that it is out of the players hands.

“All we can do is keep doing what we are told and our lads have been living like hermits when they get back home after training but we are in times that we have never seen before in our lifetimes. You just don’t know what is going to happen next and that is the scary thing. It’s just a weird, weird time. Obviously I’d like football to continue, and I think that it really has helped a lot of people to have something to watch on the television when they are stuck at home, but we know that there are a lot of people out there who are sick and dying and there are more important things than football. But if it’s safe to keep playing then of course we’d love to do that,” said Amond.