WILLIE Mullins missed out on the first Irish Grade 1 of the year when Blue Lord had to settle for second place behind Bob Olinger today in the Lawlors of Naas Novice Chase at Naas Racecoure but the earlier performance of Energumene gave him plenty to smile about. 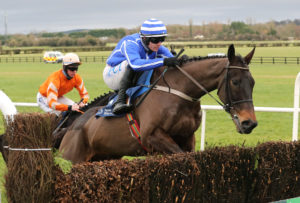 With Paul Townend on board, Energumene went over the second last fence level with Captain Guinness, and jockey Rachael Blackmore, but the Mullins trained horse showed his class and pulled away for an impressive win.

Energumene was immediately shortened in the betting for the Arkle at the Cheltenham Festival but it remains unclear whether he will run in that race or target the Marsh Novices.

In the big race of the day, it was once again Townend going up against Blackmore over the last fence but this time it was Racheal who came out on top as Bob Olinger justified the talk about him.

Envoi Allen won that Lawlors Grade 1 last year before going on to win the Ballymore Novices Hurdle at Cheltenham and trainer Henry De Bromhead may plot the same route for Bob Olinger, but the Albert Barlett is also an option.