CARLOW’S Linda Kenny has been elected as Chairperson of Leinster camogie. The Carlow lady, who is the current provincial Secretary, will succeed Kildare’s Hilda Breslin who takes over as national President in April. As the current provincial secretary it was a role Linda had not been considering but in recent months events took a certain direction and fast-forwarded a decision making process which has seen her come to this point. 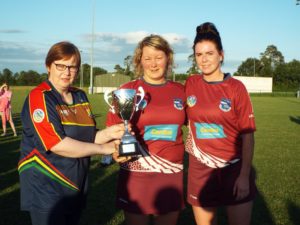 It has been a tough time for the Carlow officer. She has battled illness and ill health for a number of years now, then in December her father, Michael Regan, died suddenly while a good friend and colleague in Leinster camogie passed away too.

At the time camogie was the last thing on her mind but the Laois County Board recognised this, nominated her for the position and then gave her space when moving to one side.

“I thought about it and weighed things up. It was a very bad year health wise and the nominations had to be in the day the former Chairperson who I worked with and served with died in tragic circumstances, which was on the same day Daddy died.”

There were other factors in Linda’s decision.

“The timing has been awful but I had to go this time. There is a rule in camogie which says you can only serve ten years in one unit. As secretary I would have had nine years done and would not have had a chance to do a three-year term as President.”

In a tough situation, she had until 19 December to confirm her candidature.

Amazingly, Linda never played camogie but after a stint with Coisde she was encouraged by Pat O’Brien, the former Carlow County Board Secretary and Chairman of Carlow camogie to get involved. She has never looked back and has assumed every role possible within the county.

“Pat rang me today. There is no prouder man in Carlow today than Pat,” related Linda, who has served as Leinster Registrar before she was elected Secretary in 2018.

On Saturday, the Leinster AGM was held by video link with voting taking place by post earlier in the week. There was great jubilation among her supporters when it was announced the Carlow delegate had received eighteen votes to see off the challenge of Melanie Ni Dhuinn, and Martin Quilty, both from Wexford who had a combined total of six votes.

“I am completely overwhelmed by the level of support. Last year has been tough but it has been tough for everyone in the country. The support I got when I couldn’t attend the games and when my father passed, every club in this county, Leinster and even nationally, the support I got was phenomenal. Players, coaches, administrators and the outgoing administrators in Carlow. When I couldn’t be there, they put their shoulder to the wheel and kept it going,” said the emotional Burren Rangers club lady.

The Chairperson position sees her assume the role of Vice-President of the Association too. Is there a chance she could become national President?

“Look, I would never say no but at the moment I am honoured to have served as the Chair in my club, county and province so we will see where it takes us from there. I have some phenomenal support but the year ahead is going to be a slow burner for camogie and all sports,” she said.