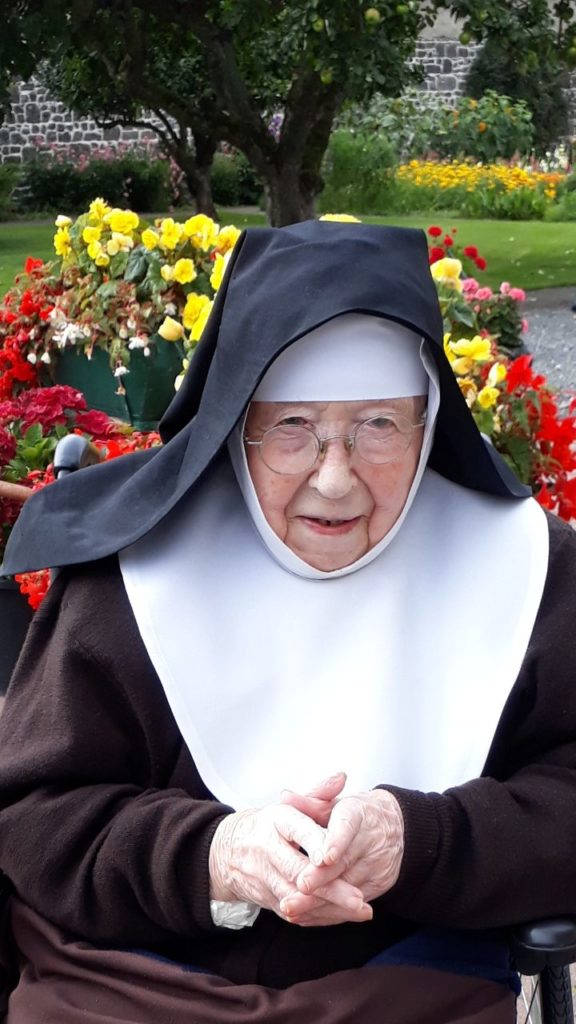 SISTER Anna Maria O’Neill, who passed away peacefully at the Poor Clare Monastery, Graiguecullen, Carlow on Wednesday 23 December, was the oldest member of the Poor Clare Federation in Ireland, being just 112 days short of her 100th birthday.

Born Francie O’Neill on 14 April 1921 in Bracknagh, Co Offaly, she was daughter of the late Laurence and Stella (née Campion), farmers and publicans in the Offaly/Laois/Kildare border village. She was one of four children and has one surviving sibling, Sr Patricia O’Neill, a Mercy Order nun in Dominic Street, Limerick. Sr Patricia is aged 103.

Educated at Bracknagh National School and by the Presentation Sisters, Portarlington, Francie ran the family pub up to the age of 25. She worked hard and for enjoyment loved to go dancing. Prayer played a large part in those early years, and when her father fell seriously ill, her prayers intensified and were answered when he recovered his health.

Francie felt the Lord was calling her to the religious life, so on 26 April 1946 she entered the Poor Clare Monastery in Graiguecullen as a postulant, taking her final vows five years later.

Sr Rosario Byrne, mother abbess at the Poor Clare community in Graiguecullen, said of Sr Anna Maria: “She was a great gardener and provided the community with a wide range of vegetables for the dinner table. Sr Anna Maria was a great singer and had a beautiful touch playing the organ, having learned to read music while attending the Presentation Sisters in Portarlington.

“She was an avid reader and would read books of heavy theology. For light reading she greatly enjoyed ***Ireland’s Own***.”

The mother abbess described Sr Anna Maria as a woman of deep spirituality who possessed a great sense of humour.

Sr Anna Maria only left the Graiguecullen monastery for medical reasons over the 75 years and those occasions were rare, as she enjoyed robust good health.

The first reading at Mass was by Sr Dominic Comerford and the second reading by Mother Abbess Byrne. Nephews and niece of Sr Anna Maria and Mother Francis O’Brien led the Prayers of the Faithful.

Organists at the Mass were Mary Gaskin and Sr Analiza Labastro.

In a homily to Sr Anna Maria, Bishop Nulty said: “Luke introduces us to two wonderful characters in his Gospel text for today’s feast, Simeon and Anna. Simeon prays the prayer I prayed with my dad as he died 14 years ago: ‘Now, Master, you can let your servant go in peace …’ and now I pray it with every dying person. Simeon takes Jesus in his arms – we need to take Jesus into our hearts, into the hearts of our family life.

“Anne Thurston, the writer, reminds us that Simeon seems to understand as this child grows, we diminish. Birthdays lay down a marker for our death days, and that’s not to be morbid.”

Bishop Denis continued: “Sr Anna Maria was born on 14 April 1921. I remember her birthday coinciding with a Good Friday a few years ago. She loved birthdays. She still celebrated in her own inimitable way. Sr Anna Maria loved a party, a song, a story. She was the John B Keane of the community next door! Even last month, as she sipped tea sitting in her wheelchair with me in the convent dining room, she looked forward to her 100th birthday next April. I’m not sure had the (presidential) cheque anything to do with it!

“I was reminded that longevity was in the Bracknagh genes – her sister Sr Patricia was 103 on 11 November last. Sr Patricia visited Sr Anna Maria over the years on her 90th birthday for her diamond jubilee; each visit from Limerick necessitated a stop at Peadar Doyle’s shop to get ‘11 of this and 12 of that’ for the community. The community of 11 has now slipped to ten with Anna Maria’s passing.

“Anna Maria was blessed with quick wit, with a great sense of joy and humour. We are all the better from her many stories. She would smile at the second character in Luke’s Gospel today, Anna, her namesake. Luke tells us she was ‘the daughter of Phanuel of the tribe of Asher. She was well on in years, her days of girlhood over’. Annas obviously live long!

“I can imagine the grin on Sr Anna Maria’s face at ‘her days of girlhood’ being passed. Growing up in a pub in Bracknagh, she took over the running of the pub from her mother as years passed. Some years ago, the late broadcaster Marian Finucane on an RTÉ programme from the convent asked Sr Anna Maria if she missed being married and having a husband. Her answer was simple: ‘Sure, if you had a husband, he could come home drunk.’ She had seen it all in Bracknagh. And sadly, on the Feast of the Holy Family, too many families live with this reality every day.”

Staying with the theme of family, Bishop Nulty said it was her dad’s illness that led Francie to consider the more serious aspects of life and she prayed for guidance. Her dad recovered, but Anna Maria continued her prayers and she eventually felt called to the Poor Clare way of life.

“Her uncle had been a curate here, Fr Edward Campion, and that gave a tangible link to the monastery and to Graiguecullen, before she would enter in April 1946 at the age of 25.

“She would spend the next 75 years in the enclosure. The influence of St Clare and St Francis was obvious in Sr Anna Maria’s life. She tended to the vegetable garden and years before climate change was ever heard of, she worried about the harm pesticides and artificial fertiliser were doing to the bees, the birds and the butterflies.

“Over the 75 years she spent a good deal of that time in quiet adoration prayer in the depths of the night. It was from here she got the sustenance to live her calling. Like Anna the daughter of Phanuel, Sr Anna Maria never left the temple, serving God night and day.

“She loved Ireland’s Own and the Reader’s Digest. We all will have our favourite from her huge repertoire, but the thing with Sr Anna Maria was that she told them so well. Our retelling would never do them justice. One I enjoyed from her in recent times: two nuns went into a restaurant for lunch. A group of people at a nearby table started wondering what order they belonged to. One thought ‘Mercy Order’, another said ‘Presentation Order’. A third was sure they looked like St John of God Sisters. A man got up from the table, saying: ‘I’ll soon find out’. He came over to the nuns and asked: ‘What is your order, sisters?’ To which they replied: ‘Lamb chops, they’re delicious’.”

Bishop Denis continued: “If you showed you enjoyed the first story, she immediately followed up with a second: this man went into a restaurant and ordered a meal. It wasn’t to his taste, so he hastily called the waiter. ‘Waiter! Waiter! Waiter! This meat is gone off! Call the manager immediately.’ The waiter calmly replied: ‘He’s gone off, too.’ She laughed heartily at the end of every joke. She brought a sense of joy into community living. Even in more recent challenging times with her own ailing health and the context of Covid-19, she never forgot to smile.

“I think Covid has robbed us of a lot. While our mask hides our face, know that God’s Son sees our smiles. While we can’t embrace, know that He holds us. And while we keep our social distance, know that He is never distant from us; He is walking by our side. He is always with us.

“The reintroduced tighter regulations around funerals are particularly difficult on the bereaved, on the celebrant and on funeral directors. Ten attending a funeral would suggest that some of the community who shared Sr Anna Maria’s life for the past 75 years would have to absent themselves. Irish families are generally large families. Who decides which sibling or son or daughter can’t attend? Ten is too tight in churches that are socially distantly spaced and sanitised. So often it’s what happens before the Mass or at the burial that dictates the rigidity of this funeral regulation. It’s a huge pity that the richness offered by the Church liturgy, as on today’s feast of the Holy Family, is conditioned by an illogical and unworkable guideline.

“Simeon and Anna meet the parents as they enter the temple – one larger than life: Simeon; the other, Anna, in her 80s. They are the two who represent all of us looking today on the face of Jesus. Take Him into the bits and pieces of our wounded worlds, where the laughter and tears of family life are lived. Someone’s smartwatch was the wrong colour on Christmas Day; someone’s jumper was two sizes too small; someone’s book was one they had already got two months ago.

“Someone else wrote recently: ‘It’s good to have the Christmas season. It reveals to us a hunger shared the world over for being family.’ Christmas doesn’t cancel the harsh realities of life but equips us to meet and overcome them. The Feast of the Holy Family reminds us that Jesus is born into a family first and from there into the world.

“I think of the ceiling in a friend’s home. There are, apparently, 123 tiles in place, but there is one missing. As we gather, we often speak about the missing tile, must fix it for next Christmas … usual promises made in good faith. If we keep fixated on the missing tile, we risk missing all the others that are in place. For all that irritates us around family, there is so much joy, goodness and love – let’s celebrate family on this feast day.

“And let us celebrate the richness of religious family life, enriched by the joy and the commitment of Sr Anna Maria O’Neill.

“May she rest in peace.”

Following Mass, Sr Anna Maria was laid to rest in the community cemetery, with Bishop Nulty reciting the final prayers at the graveside.

Sr Anna Maria is survived by her sister, Sr Patricia O’Neill, nephews, nieces, grandnephews, grandnieces, her sisters in the Poor Clares, relatives and friends, as well as the communities of Graiguecullen and Carlow.

She was predeceased by her brothers Seán and Edward O’Neill.