IT was a decision which came with a heavy heart but Bryan Byrne’s decision to move to England and sign for Bristol Bears has been vindicated. THE Ashton Gate side, who are the current Challenge Cup holders and last season’s English Premiership semi-finalists, are riding high at the top of the Gallagher Premiership table and are one of the sides to beat in England this year. Bristol have won five games out of six and are on 24 points, four clear of last year’s champions, Exeter Chiefs, and Newcastle Falcons, who are locked together with twenty points each. Further back on 19 points, in an ultra-competitive Premiership, are Sale Sharks and Wasps. 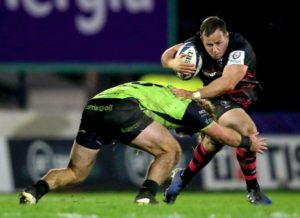 Bryan Byrne in action for Bristol Bears against Connacht in the Champions Cup just before Christmas
Photo: ©INPHO/Bryan Keane

At the start of 2020 the former Leinster hooker knew he had to bite the bullet and leave Leinster, who are arguably the best club side in Europe. As students in Clongowes, he and his brother, Ed, had played together where they won two senior cup medals a piece. Roughly their paths in the Leinster Academy and into the full Leinster squad ran a parallel course.

Yet, whether it is a junior club game down the country or a top club in Europe, players want to play and play regularly. You could never say the twins were getting regular games. Bryan was aware of that.

“You can’t put four hookers into two spots every week. It was time for me to make a change and thankfully, Pat (Lam, the Bristol Director of Rugby), has shown confidence in me. We have a very good relationship,” said Bryan who settled in well across the water when he initially went on loan in February 2020.

“It was a lot different than what I was used to. I was living in Dublin and around a lot of people I knew. The loan move happened a lot sooner than I expected. It was a big change but I adapted very quickly.”

After an ultra-successful career with Connacht, Pat Lam, had moved to Bristol at the end of the 2016-17 season. He brought with him John Muldoon who enjoyed iconic status in Connacht was well as other members of the coaching staff including Conor McPhilips.

Byrne joining Bristol when he did coincided with the last pieces of the jig-saw being put in place by Lam. The Leinster man made his debut against Harlequins on 8 March, coming into the action on 38 minutes in a 28-15 victory. Then came the lockdown and the season didn’t resume until 15 August when they beat Saracens 16-12. During the lockdown, Byrne was offered a one year contract which he was only delighted to sign.

The club and their hooker were on their way making it to the semi-final of the Premiership where they were beaten by Wasps (47-24). There was rich compensation for Bristol when they went to France and beat the mighty Toulon (32-19) to claim their first piece of major silverware in 37 years when winning the Challenge Cup. Sadly, the Carlow rugby player didn’t take a part in those final games as a hamstring injury cut short his season.

Byrne was back for an opening league tie away to Wasps. A 23-20 defeat was to be their lot. After being demolished only a month before by the same side, Bristol were not discouraged and felt they were on the right track.

“There was a bit of confidence there having won the Challenge Cup last year. We knew we had built a good squad. Confidence was high and we made it a goal to be in play-offs in both competitions this year,” Byrne said.

That confidence was justified.

“Thankfully we bounced back well and won the next five league games,” noted Bryan.

The last win and fifth in all was a significant 20-7 away win to Exeter Chiefs who had completed an amazing 2019-20 European Cup and English Premiership League double.

Shoehorned into the English Premiership was an away win over Connacht and a home defeat to Clermont Auvergne in the Heineken Cup. Byrne actually scored a try against the Irish province in their 27-18 win. For club and player it was solid form in Europe and excellent form in England. 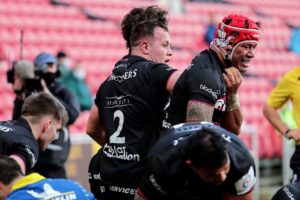 While most of the Bristol squad has been capped at some level or another you couldn’t say they have any superstars. Byrne agrees but admits a Fijian winger has caught his eye.

“Semi Radradra is up there as one of the best players in the world. I think that is what Pat (Lam) has done really well. He has built a coaching group who work really well together and a squad that plays his system well. He looks for a certain type of player. You would not have massively recognisable names but he has players who play his system really well.”

Bristol, Exeter Chiefs and Newcastle are the three top teams in the league at the moment. When Bryan was in school it was the Leicester Tigers, Bath, Gloucester and the Sale Sharks who would have been the big English clubs. Saracens too until they ran into trouble when breaching salary cap rules. Bryan agrees it might look as if there been a shift in the balance of power but says these clubs haven’t gone away either.

“Bath are a strange one. They are very hard to beat at times but then some days they have off days and struggle.

“In terms of Newcastle, they are the surprise ones this season. They came up from the championship and I don’t think people expected them to do as well as they are doing. We have been the only team to beat them in the Premiership this season so they are going really well.”

Back home, Bryan’s brother was capped for Ireland for the first time when he came on against Italy in the delayed Six Nation’s Championship at the end of October. The Bristol Bears hooker says he was able to enjoy the moment with his parents in Carlow.

“Thankfully, it was during our off season. I was able to quarantine and be at home for a week. Obviously, it was a lot different but we were delighted for him. I know my parents would have loved to have been in the stand but we knew for a long time there would be no fans in the stadium. We were able to enjoy the game and broke out the champagne before kick-off. It was nice,” admitted Bryan.

Going forward, the Bristol hooker, barring injury, can look forward to a hugely competitive and successful season. The scheduled European games which were due to take place now are off because of the Covid pandemic. Their next Premiership tie is home to Bath on Friday 29 January at 7.45pm. Bristol are thinking big. Byran Byrne is thinking big.

“Pat (Lam) has put a good squad together and there is an exceptionally good squad there. There are good systems in place and we believe we should be competing in both the Premiership and in Europe. It is disappointing Europe has been postponed for a while but it looks as if it has to be done. Hopefully we can play those games in a couple of months. Bath is a big game.”

When he was in Leinster those sort of games didn’t come around every week. The nature of the English league and their participation in Europe sees high intensity games every time they tog out. There are no PRO 14 slots where fringe players can get a run or where players are rested.

“I think there are obviously some bigger games than others. With Leinster, when you were playing an English team, it was a massive game. Now, it is cool for me to be playing these teams nearly every week. You are testing yourself against some of the best teams in England every week which is good.”

Going forward though, Bryan knows he has no chance of getting a senior cap if he stays in England. What he has to do now is to maintain his place on the Bristol team, stay in the limelight and see where that takes him. He would like to return to Ireland at some stage.

“I am really enjoying it over here. In an ideal world I would do a couple of seasons here and hopefully get picked up by an Irish province for a few years and go from there.” 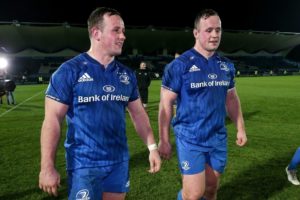 Bryan Byrne with his twin brother Ed after one of their last games together for Leinster in January 2020
Photo: ©INPHO/Laszlo Geczo

He also knows he has more than a 50-50 chance of coming home with some silverware now. What are his targets?

“Win a trophy. We are top of the table in the Premiership now so we have our sights set on that. Regards Europe, we need to win the rest of the games in the pool. It would be great to win both of them. At the moment we are focussing on the Premiership until the European games get rescheduled. Definitely winning the Premiership is the big one. It is realistic. Exeter won it last season and we have just beaten them up in Exeter. We are in a good spot,” maintains Bryan.

“For me, it has been a very good move. I want to keep it up now. I am really enjoying it over here. Hopefully I can keep in there.”