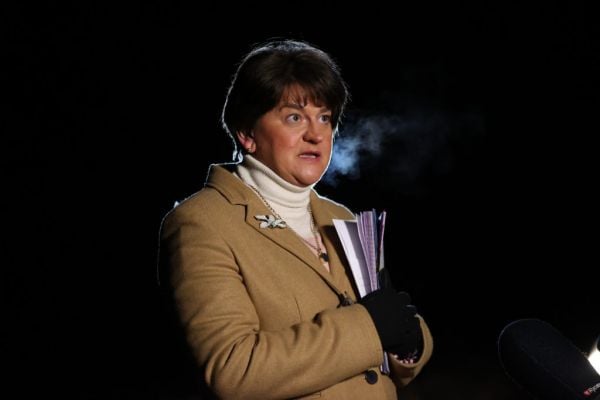 Arlene Foster has accused opponents of the armed forces’ involvement in Covid-19 care in Northern Ireland of intolerance.

Around 100 military technicians are to help the overstretched NHS with nursing duties.

She said: “I was greatly saddened by those who have criticised this deployment for intolerant political reasons.

“They have placed their ideology before the needs of patients.

“That is an appalling indictment on their motivations in public life.”

She recalled previous emergencies in Northern Ireland which required aid from others, such as when the region received air support from the Republic of Ireland Air Corps for farmers with stranded animals.

“That is what neighbours do, they help each other in times of need.

“I welcomed the defence secretary’s assurances of further assistance if it was needed and I reassured the minister that the overwhelming majority of people in Northern Ireland welcomed the support.”

Some military personnel are to aid Northern Ireland’s pandemic surge response at the Nightingale facility in Belfast City Hospital.

Sinn Féin deputy first minister Michelle O’Neill has said the priority of her party has “always been to save lives” and would “never rule out anything that actually supports the health service”.

Her party’s Assembly member Pat Sheehan previously told the Stormont health committee that he did not wish to start a row about military assistance, which has proven divisive in the past between Stormont parties.

He added: “My only concern is that they don’t get in the way of the real professionals who are doing the work to save lives.”