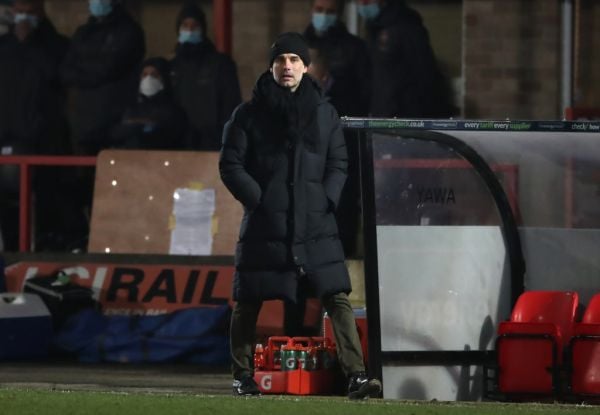 Phil Foden, Gabriel Jesus and Ferran Torres struck in the final 10 minutes to secure a 3-1 win and avoid embarrassment.

Alfie May’s second-half opener had put Cheltenham on the brink of one of the competition’s biggest upsets.

The League Two side matched the six-time winners and City struggled for a breakthrough before eventually booking a fifth-round trip to Swansea.

Guardiola said: “We learned to suffer and at the end the quality made the difference. We won the game and we are happy to win this game in this type of competition.

“We knew how tough it would be and the response from the players was magnificent.

“The chances we had a 0-0 were so clear and if we scored it would have be very different.

“They had a fantastic team, what they do they do really well. They defended well, May is an exceptional player. Every throw is more important than a corner or a free-kick.

“In the FA Cup this is why it’s nice, everyone can beat everyone. I don’t have any regret over how we were behaving and the way we played. We scored three magnificent goals.

“We reacted so well, in this competition it’s not the first time a Premier League team has suffered. We suffered well.”

City had chances to open the scoring and Ben Tozer cleared Benjamin Mendy’s drive off the line in the first half while Zack Steffen turned May’s shot wide at the other end.

Jesus should have given City the lead eight minutes after the break but hit a post after Foden put him clean through.

Six minutes later the Robins grabbed a shock lead when the visitors failed to deal with Tozer’s long throw and May stole in ahead of Mendy to score from close range.

Guardiola added: “Phil is playing really well and in the right moment he scored a goal. In the bad moments, when we were losing, he brought his personality to the game. Phil has to be Phil, not be Kevin De Bruyne.”

Boss Michael Duff said: “I thought it was an incredible performance, I’m really proud of the players. Maybe we have stepped out of the racecourse’s shadow for five minutes.

“The last thing I said to them was ‘can you walk off the pitch with your shoulders back proud of yourself?’ You can’t guarantee the result but we said ‘can you make a mark in a positive way?’ Pep and the players know they have been involved in a half-decent football match.

“We could have been 1-0 down after 17 seconds and there was a bit of nerves because they can put nine past better teams than us.

“I don’t think the lads deserved to concede a third goal, we have lost to the best team in the world right now and the players have given an incredible account of themselves.

“There’s a tinge of disappointment but the lads will get unbelievable attention so I told them to enjoy the moment but to turn up on Monday ready to go to work because we have Oldham at home (on Tuesday).”