MARCUS Lawler and Muireann O’Sullivan have being going out with each other for over seven years now. Their relationship blossomed when they went to their Debs together in 2013. When Marcus won his 200m bronze medal in the 2019 World Student Games in Naples the Old Leighlin footballer was in the stadium to witness his achievement.

“One of the best days ever. That seems a lifetime ago now. We were only talking about it the other day. It was a huge day in his career,” said Muireann last week.

The previous day, IOC President, Thomas Bach had announced the Tokyo Olympics would definitely go ahead in July. That was good news for Marcus.

“There is no plan B. It is definitely happening and we can only go on his word,” he says.

“He (Thomas Bach) seems adamant it is going ahead and that is the only thing we can go on. We can’t trust speculation. I am preparing as if everything is happening. The deadline is 29th June and I am gearing being ready for it.” 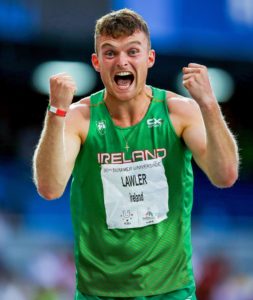 Being an elite athlete Marcus has been able to continue his training and has taken part in athletic meetings in Europe.

He travels to the north to train with sprinter Dean Adams who won the 60m national indoor title last year. In Dublin he paces himself alongside Stephen Gaffney who won the 2020 100m gold medal. Locally he trains with Adam Murphy and Shane Webb.

Next week he travels to Austria while the national indoors championships take place in February. As it stands he is on the plane to Tokyo. The top 56 in the world qualify and Marcus is hovering around 30th place.

“It is like a league table but once I get out there and start competing everyone will be going up and down,” explained the Tinryland man. In his head and on the track Lawler is training for the Olympics which will definitely take place in July.

“I completely parked the doubt. Now, I am preparing for next week. My ultimate short term goal is to be in good shape in Austria. Then there is (hopefully) a national indoor championships in Abbotstown at the end of February. It is hard to see it happening but that is my next goal. I plan, work and train as if it is going to happen,” the Carlow 200m sprinter confirms.

In contrast, as a physiotherapist in Beaumont Hospital in Dublin, Muireann has been at the front line in the battle against Covid. Before the pandemic she won a Leinster junior football title with Old Leighlin in 2018. The following year she parked her GAA involvement to concentrate on her career.

“I had decided to step away for a little while to focus on my physio work in Dublin. It had been a huge commitment. I had done my Masters in UCD. I had a commitment to training and travelling up and down. It was exhausting. I just decided to take some time out to focus on my work.

She made the break in November (2019) and then the pandemic struck a few months later. She soon realised she was in at the deep end and in an area where she was helping people with respiratory difficulties.

“No matter how experienced you were this was something totally unexpected,” she remembered.

From March to June she was assigned to two surgical respiratory wards for patients in post-op. and post-transplant patients.

From June to September she covered two ICU wards and a high dependency unit.

“I had a crash course and was getting trained up in the height of the pandemic. That has been a challenge but I learned a lot as well.”

Now Muireann is continuing with her training and is on call at different times. She also works weekends.

Old Leighlin is a long way away for her now.

“It is like a new world. It feels like I am completely immersed in this new world in the hospital. It (football) seems like a lifetime ago. As do a lot of other things apart from football. Even having regular family outings.

“I am still lucky and am running and doing gym staying as active as I can. I wouldn’t rule out going back to football at some stage.” 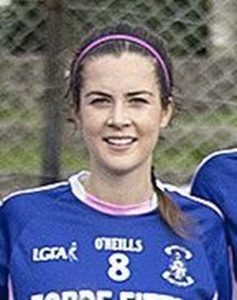 She is happy to talk about her relationship with the Olympic hopeful.

“It is definitely a challenge but no more than it has been for other people. We are in a unique situation. I am a health care worker. Marcus is being allowed to travel. In the first lockdown we kept our distance for about six weeks but this time he is training in Dublin and is travelling to the North as well. I do get to see him once or twice a week but we do have to be sensible as well. I got my first dose of the vaccine two weeks ago now and when I get the second dose that will help.”

A couple of weeks ago Muireann was vexed when some people said they would not be taking the vaccine. So much so she used social media to express her support for the vaccine.

“I felt very privileged to get it so quickly. That is why I tweeted about it. It is something I feel quite passionate about. There are people who are anti-vaccine out there and I think people don’t comprehend how serious this virus is until you are working with these patients and you see how devastating it is for everyone,” she explained.

She also feels uneasy that higher income countries seem to be top of the queue when it comes to getting the vaccine.

“I read this week 39 million doses have been administered in 49 higher income countries but where 25 doses were given to one lower income country. Equitable access is a huge issue. It is a relief for myself, my family and Marcus but I do think there is a long way to go to where older people in other countries get it.”

For the moment football is not on the horizon for Muireann.

“It would make sense to train with a Dublin club but you are always loyal to your own club. I wouldn’t rule out going back once this has settled down. There is huge talent in the (Old Leighlin) area. For such a small club we have been really successful,” she articulates.

Then there is Marcus and his ambitions to be an Olympian. He has her total support.

“The amount of work that goes into it. It sounds glamorous when you talk about training for the Olympics or Europeans but when you see the graft that goes in. It is their job but qualifying will make it all worthwhile.”