NEW Carlow senior hurling manager, Tom Mullally, is bracing himself for the challenge but he says it could be some time yet before he is able to finalise his management team and a panel of players. With the Covid numbers still dangerously high no-one can say for certain when counties will be able to return to collective training and it looks as if the national leagues will not start as scheduled at the end of February.

The Glenmore man is best remembered for leading Mount Leinster Rangers to a famous 2012 All-Ireland intermediate hurling All-Ireland title in Croke Park and he was also in charge when the club went on to win a Leinster senior hurling club championship the following year. While he has severed his connections with Rangers for many years now, he is still well acquainted with hurling within the county. He was a coach alongside Carlow minor hurling manager, Christy Kealy, for the last two years. The Rangers man returned the compliment when helping Mullally to bring Naas to a Kildare county final before the pandemic put an end to club games last October. Mullally also managed the Wexford under 20s, leading them to two Leinster finals in 2017 and 2018 but they were well beaten by Kilkenny the first time and lost to Galway by a solitary point after extra time the following year. 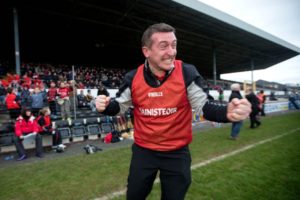 Mullally has put his successes with Rangers to one side now.

He was particularly taken with the Carlow minors over the last two years. Both times they exited Leinster by a single point to Westmeath.”

“Their attitude and application was excellent. It just didn’t work out for them. It happened to be Westmeath both days but I wouldn’t fault anyone’s application. Their attitude was good and the hunger that was there to represent Carlow is what you need as a starting line,” he said.

While these players might be a bit young yet for senior intercounty hurling the new manager has inherited a group of players who have enjoyed unprecedented success with Tipperary man, Colm Bonnar.

“Colm has been fantastic. It was the golden years of Carlow hurling and probably it is at a cross roads now. That is the way it is. Colm and Martin (Byrne) did a fantastic job and they have to be applauded,” agreed Mullally.

In his own words there “is still a bit to do” before he announces his own management team while he expects players with intercounty ambitions are keeping themselves fit.

“There is plenty of work to be doing. Maybe it is a blessing in disguise that we couldn’t go out (training) on Monday. It will be a few weeks before we are set up.”

As for group training?

“I don’t know when it is going to be. It won’t be 1 February anyway. Probably later in February so it will give us time to get used to each other too. We are starting late, we will have to hit the ground running. I think everyone else who we will be playing in 2021 are well sorted and ready to go. It is what it is. We will look forward.”

Carlow GAA Chairman Jim Bolger is delighted with the appointment of somebody as experienced and knowledgeable as Mullally as the new senior hurling manager.

“From Carlow GAA’s perspective we are delighted to have appointed Tom as manager of the senior hurlers. He’s a man with a wealth of experience in different counties. He’s a native of Kilkenny, has previously worked as under 21 manager (with Wexford), he was involved with the Carlow minors last year and obviously he was involved with Mount Leinster Rangers when during a very successful period when they won an All-Ireland intermediate title in Croke Park and subsequently they broke through the glass ceiling for a Carlow team and win the Leinster senior hurling title and going all the way to the All-Ireland final when they succumbed to a very strong Portumna side. He has a tremendous record and an in depth knowledge of Carlow hurling and we really look forward to working with him as soon as we get the green light for collective training to begin,” said Bolger.

Mullally’s knowledge and passion for Carlow hurling set him apart from other potential managers.

“That is something that gave him an advantage over other prospective candidates, his knowledge and his respect for Carlow hurling, that was very evident all the way through the progress. We are very happy with the appointment and we wish him every success,” said Bolger.

Mullally will also continue to manage Naas in Kildare and Bolger said the new season format made that easy to accommodate.

“He will be tying in with Naas but what helps in that regards is the split season. Naas would have a fair few players involved in the Kildare county team so it’s unlikely there will be any clashes, we don’t envisage any problem in accommodating that,” said Bolger.

Bolger has Guineas double in his sights