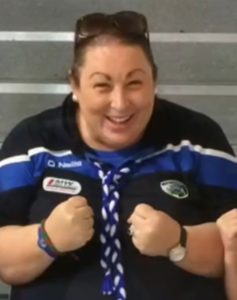 There was much sadness in Graiguecullen when people learned of the passing of Sinéad Ní Nualláin who had been principal of Gaelscoil Átha Í for many years and one of the founding members of the school. Sinéad, a native of Graigue, had been working as a múinteoir in Gaelscoil Phortlaoise for the past number of years.

In a statement on the sad passing of their dear colleague, the Portlaoise school said: ‘It was with great shock and sadness we learned of the untimely passing of our dearest friend and colleague Sinéad Ní Nualláin, or Múinteoir Sinéad as she was affectionately known here in Gaelscoil Phortlaoise.

‘Sinéad was a gifted teacher and a true inspiration to all of us. She had a heart of gold and it was an honour to witness first-hand the love, kindness and attention she showered on each and every one of her pupils.

‘An invitation to Sinéad’s classroom was sure to be an exhilarating experience, often involving the celebration of a good news story or the declaration that her star pupil had just mastered his tricky words or completed his first reader unaided. To see the pride in the múinteoir’s eyes as she regaled these precious milestones was a joy to behold.

‘Parents will testify to her kindness and compassion when they needed reassurance. They knew their children were in safe hands and that Múinteoir Sinéad had their back at all times.

‘We will greatly miss Sinéad’s bubbly personality and positive disposition in the staff room, around the playground and on the corridors, her enduring passion for the Irish language, Laois GAA and, of course, her beloved Graiguecullen.

‘Above all, we will miss her friendship, her kindness and unlimited generosity.

‘Sincerest condolences to her parents Séamus and Jane, her brother James, his partner Magdalena and her beloved niece Emily.’

Sinéad was a strong advocate and passionate about the Irish language and offered extra lessons as Gaeilge to students during out-of-school hours. She was also one of the founding members and principal of the Gaelscoil in Athy.

She was very involved in her home town and community around Graiguecullen and highly involved in the local GAA blub there. Indeed, with the club she had begun integrating it with the Joe McDonagh Foundation, a support service provided by Glór na nGael and the GAA to further the Irish language in the community.

Aged in her 40s, Sinéad was involved at juvenile level and in fundraising efforts such as Strictly Come Dancing or at the gate and at matches supporting her home team of Graiguecullen when they played matches in O’Moore Park.