WITH Cheltenham still over six weeks away (March 16-19), Willie Mullins has said it is too early to get worried about the ban which English racing has imposed on amateur jockeys as part of the Covid restrictions. 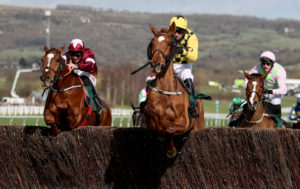 If the ban is to continue, that would rule out his son, Patrick, from riding at the meeting while it would mean the champion trainer would have to go looking for a replacement jockey for horses which Patrick would usually be getting up on.

“Certainly he (Patrick) would be a top member of our team riding in Cheltenham. He would have a half-dozen nice rides. Especially with David (Mullins) retiring. That would put him in for a lot more. He is a top guy to have on your team over there,” said Willie.

“It was another surprise but we are getting used to those in these pandemic times. I am hoping something can be done. Hopefully the figures on both sides of the Irish Sea will be better and that Government will be looking at things differently. That is the best we can hope for.”

Mullins said it has been a topic of conversation between trainer and jockey.

“There is obviously talk ongoing. It is very unfair on the top English amateurs there. There are some top amateurs there and they look forward to Cheltenham like everyone else does.

“You get lots of amateurs in other sports. In The Open in England, amateurs are allowed play golf. I am sure they are allowed to play tennis.

“I haven’t fully read through the protocol that is ongoing to keep them out of it. I feel maybe the thing might shift about in a month’s time or six weeks-time and there might get a chance to get back and ride in the festival. I am sure Patrick and other amateurs will be doing their best and we will be trying to help them as well.”

In response to a question at an on-line press gathering on Monday, Mullins said he was hoping he would not have to bring a smaller and more select team to Cheltenham this year.

“We are making arrangements to have things in place to bring our usual team. Until we see what rules and regulations are going to be applied we can’t prepare to do the usual stuff,” he agreed.

“We are trying to get a team of staff together. While we have plenty to go to Cheltenham we are wondering about getting them back. I have people who work for me in England when we bring horses across to England. I am getting them involved as well. The shipping side, I am leaving to my brother. He is well capable of that. I tend not to get too bogged down as the whole scenario could change in a months-time to six weeks-time. At least that is what we hope.”