COVID restrictions have hit part of life throughout Ireland and across the world so Jim Bolger’s first couple of months as Carlow GAA Chairman are no different.

But he is a man arriving in the hot seat with a long term vision so he is determined that the difficulties he is encountering at the moment won’t derail him too much.

One of the biggest obstacles that Covid is causing for the new chairman is interacting with the clubs. One of his key objectives is bring all stakeholders within the county together and get everybody pulling in the same direction. Harmony with Carlow GAA circles is a big part of his plan.

Ordinary to do that, getting out and visiting the clubs and meeting face to face around the county would be big part of what he would do in the early months. Level 5 restrictions around the country since the start of the year, and now on into March, have made that impossible but Bolger feels that it will be worth the wait to have to the opportunity to discuss issues facing clubs in person.

“I want to engage with the clubs and listen to what their needs are,” said Bolger. 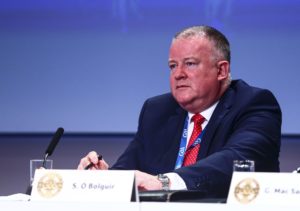 New chairman Jim Bolger wants to pull every strand of Carlow GAA together and get them pulling in the same direction
Photo: ©INPHO/Ken Sutton

“In that regard, one strand of my plan for the future to develop a strategic plan for the county, a three-to-five year plan depending on the outcome of the engagement. That engagement is difficult at the moment because I would much prefer to go and meet them in their own clubs and talk on the ground to get a feel for their own people and property. Meeting in person is always more beneficial I feel and what I might do is wait to see when that might be more appropriate. Failing that, we will meet their executives online but I would much to wait and see if I can go out and meet the clubs in person.

“We want to look at what future do we see for Carlow GAA? What will the GAA in the future in Carlow look like for our kids? What do we want in future for our kids? It’s around that that I want to speak to the clubs because in a small county, in any county, you need everybody pulling together so we need the clubs supporting us. We need the players and management teams pulling together as well. Another aim of mine would be to rejuvenate the Carlow Supporters Club as well. I think if we are all pulling in the one direction it would be beneficial to all. Our volunteers at county board level, and the staff that we have as well. We need to be all on the same page to drive Carlow GAA forward. That’s part of my job and I will do everything in my power to ensure that we are all working together for the goal, and that is to improve and enhance Carlow GAA.

“We have to ensure that clubs within the county realise that we are just an extension of the clubs. They have voted us in to do the job and we do it to the best of our ability but we need the support of the clubs as well. The clubs have entrusted us with these roles and we have to repay but I would see that it is a collaborative approach to ensure we get the most out of ourselves. The plan would be to have more harmony throughout the county,” said the new chairman.

The concerns expressed by Peadar Bermingham of O’Hanrahans are exactly the kind of that Bolger would like to discuss with clubs. Bolger hopes that Croke Park would never forget about those at the grass roots of the game and said:

“In the club versus county situation, ironically enough Covid has given us an opportunity. Intercounty players haven’t been much good to their clubs really in the last 20 years or so, they were never there and when they did come back to their clubs they were worn out. They might come back and play a couple of Championship games and then be gone again, that’s not what the GAA was ever found for. The GAA was founded for all, not just the county players. I do think we’ll see the split season in the years ahead which I feel will be beneficial to the club players, and indeed the county players because they won’t be as worn out and they seemingly are now.

“In relation to levies. We have an outstanding loan on the training centre. I’m sure all the clubs were aware when we took on this loan that they would be part of the solution to pay back the debt on Fenagh. I think the county board before me came up with Club Development Draw which is a great tool for clubs to meet their levy, and to make money at the same tim. A 70/30 split on that is very, very fair to the clubs I would have to say. If clubs view it in that light, and benchmark it against other clubs who are very successfully selling tickets it could take the sting out of the levy and can become a very good fundraiser, if not their main fundraiser on an annual basis. It’s good that last year under Sean that they came up with the Club Draw to help clubs. Of course, we are very mindful that in the Covid climate it is difficult but I would encourage all clubs to use the Club Development Draw as a good way of fundraising. That is why I want to talk to the clubs, to hear about issues like this, and that is my plan even though the Covid climate makes that difficult. I am very encouraged by the amount of ticket selling that the clubs did even in the last year,” said Bolger.

Even allowing for the diffculties brought by Covid restrcitions, Bolger has been busy getting some building blocks in place.

“The first thing I had to do was looking at the position of senior hurling manager and we have a management team to be announced later in the week who will work with Tom Mullally (confirmed as selectors Chris Kealy, Joe Nolan and Pat Murphy alongside coaches John Dermody and Paddy Mullally. Michael Whelan continues as Liaison Officer). I’m very happy with the management team we have for the hurlers.

“I inherited the football management team but I have met with them and I am very encouraged with the football set up as well.

“We announced Pado Flynn as the U20 hurling manager, he has been there for two years and we’ve appointed him for another two years. We are very happy with the work and progress that Pado has made with the group

“We also appointed a new U20 football manager, Bernard Horohan. He’s worked with group previously at minor level so knows them very well, so we are very happy with that as well.

“We’ve put in place a number of committees as well. A very important committee is the Coise na nÓg committee. We’ve added a little bit of fresh blood but for the most part it’s very much what we had, the reason being is that they are a very effect group who work very well together. We look at the bigger picture all the time and to that end they leave their club allegiances to one side when they are working on county business,” said Bolger.

There will be review of many different areas of Carlow GAA but one of the most pressing areas will be that of Coaching and Games. In the most trying of circumstances, Sean Gannon and the rest of Coaching and Games staff are doing their best to provide entertaining and informative online sessions and Bolger will be looking to build on the good work being done.

“I’m very encouraged by the quality of coaching staff that we have. The Colts are a great idea as well, I feel. We will review our Coaching and Games in their entirety with a view to increasing the contacts with the Colts, the weekly contacts will increase I would imagine. From the S&C side, resistance training that is age appropriate initially which then leads on to S&C. We’d like a consistent model of S&C running through our squads right up to senior level so that we don’t change or move the goalposts on the players that we are developing. A consistent approach across that strand is extremely important to us. The Colts, and the way they are looked after, is very encouraging and I think young players across all the clubs are very willing to come in. We have to keep our standards high in that regard, and keep stretching the players at the appropriate level for them to develop the way we’d like them to develop. I am encouraged by the structures that are in place at the moment and if we can just tweak them and improve or enhance them then that is what we’d like. I think the coaching standards across the county have improved quite a lot over the last ten years. Kids that are coming into are presenting with a lot of the fundamentals of what we are looking for in both hurling and football, which reflects well on the clubs for the work they are doing and we need to make sure that is maintained. We know people dip in and out of helping out with teams in the clubs, and it could be something as work commitments, so we need to be sure there is enough cover in the clubs. We need to look at doing foundation coaching courses to give fresh blood the confidence to look after the kids and then to enhance that to go up to level 1 and level 2 courses. It is important though to get enough people with the foundation level coaching courses first and foremost,” he said.

It’s still very early days in his tenure but already Bolger is making his presence felt as chairman but he is only getting started. Watch out for next week’s Carlow Nationalist from more from the new chairman, including infrastructural improvements, his views on the Tailteann Cup, financial distribution throughout Dublin and more on his vision for Carlow GAA in the future.