CARLOW GAA players gave the thumbs up to the Gaelic Players Association (GPA) 2021 Rookie Camp which was held on-line over three evenings recently.

The camp, which is in its third year, is aimed at helping young players to adapt to life on a senior intercounty panel while also showcasing the supports which the GPA has to offer to players.

Intercounty footballer, Anne Roche, was told about the course by Maria Kinsella who was chairperson of the Women’s Gaelic Players Association before it merged with the GPA. The Old Leighlin footballer was hugely enthusiastic about her involvement confirming she had taken three key messages from the course. 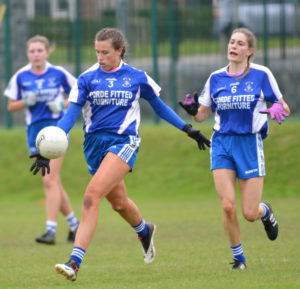 Old Leighlin and Carlow player Anne Roche was one of the Carlow players who attended the GPA Rookie Camp
Photo: Adrian O’Neill

“I know it is a cliché to say hard work beats talent but it is true. We can always better ourselves whether it is skill or fitness. Even our attitude. You can always get better

The second message was the importance of balance. It really opened my eyes. Now, you feel sport will be there forever but it won’t. You have to put effort into other parts of our lives such as studies, work, friendships, other hobbies. You have to have that balance.

Thirdly, just to enjoy sport. Today there is a lot of pressure on people but there can be only one winner. There was emphasis to enjoy all aspects of your life. The friendships, the craic, All that. Of course, winning is what all competitive sports people want but not to completely focus on winning but to enjoy the whole journey.

“Food for thought and I would highly recommend all these girls who are coming along to partake in it,” said the Old Leighlin footballer, who is in her final year in St. Patrick’s College in Dublin but is studying from home at the moment.

Having completed a Software Development course in Waterford, Éire Óg footballer, Mark Furey, is back in IT Carlow and is doing a TV and Production course. Like Roche, he is mostly operating on-line. Like so many people have found out since the pandemic struck, communicating via Zoom and Microsoft video is not a problem.

“I thought it was run well. We would be used to it with the college because everything is on-line now. We are used to the whole interactive side of it,” he said.

Mark says he would have known a little about the services the GPA had to offer before doing the course but he was glad to be involved.

“For younger members it gave a good insight into what the GPA are and what they can do to support players in their intercounty careers. They do look after you if you need a voice. Well worth doing the course.”

Senior intercounty and Mount Leinster Rangers hurler, Jon Nolan, is in his second year of an Arts Course in Mary Immaculate College in Limerick.

He was glad to have taken part. He felt the talks on the mental health aspect of sport and the importance of balancing a sporting career with his studies was particularly interesting and useful.

“The course gave us an insight into services which are available when you are playing intercounty. It was important to learn about that. The speakers were excellent and it was very enjoyable to watch and listen to these people,” the Rangers man said.