2020 was the year of the pandemic, the year the world came to a standstill, the year that everything was flipped on its head and the year that sport was non-existent. However, despite the lack of sport in the county and the world coming to a standstill, there were three major developments across the Carlow Soccer League that took off in 2020. In Killeshin, a new Multi-Use Games Area/FIFA Quality 3G floodlit pitch and new clubhouse at a cost of over €600,000 have been built (work is still ongoing on the clubhouse), St Pats Boys have completed their development of a new FIFA Quality 3G pitch and walkway for €450,000 whilst St. Fiacc’s have secured a long term lease on 5 acres of land to develop their new home grounds.

Killeshin club secretary, Ian McDonald explains that this has been in the making for almost four years. “In 2020 alone, we completed phase 2 and phase 3 of our Club Development Scheme. Phase 2 was a new clubhouse which we received a grant for from the Sports Capital Grant of 100,000. Phase 3 was a new FIFA Quality 3G pitch and walkway for which we received a grant of 200,000 in Leader funding via Laois LCDC (Local Community Development Committee). The balance was then made up of fundraisers since 2017. In 2017, we did a Lip Sync Battle at the Dolmen Hotel which got over 700 people, in 2018, we hosted an I’m a Celebrity Get Me Out of Here fundraiser and then the last two years, 2019 and 2020 we did a Euromillions syndicate as well as our club lotto.” 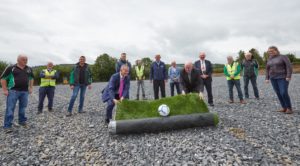 “It’s incredible that in a year of the pandemic, we’ve been able to pull off such a big development. We’re grateful to the entire community for their support, it just goes to show the value that the community places on soccer and how much of an impact it has on the community. Our chairman Liam Dempsey was the driving force behind it all. We’ve been working hard to get the club up to get the FAI Club Mark. It will benefit everyone, we have 18 registered teams and we will be letting other community groups use the multi use games area so it’s really going to benefit so many people. Our developments would not be possible without the huge support for our fundraising initiatives. This support demonstrates the value our community has in soccer as a sporting and social outlet for all.”

St. Pat’s Boys have been working hard over the last number of years to secure the funds with club finance officer Liam Byrne citing the hard work of the ambitious committee in fundraising over the last number of years. “This is something we’ve had planned for a long time. We were lucky to have the old astroturf which was quite modern at the time when we opened it back in 2002. As time went on, we needed to upgrade our facilities. The all weather pitch would solve our problem as we could play on them all year round and it alleviates a bit of stress on grass pitches but on a bad weekend and there’s 2 or 3 games, they take quite a lot of expensive cutting up so now we have a facility that we can use all year round. The club has grown so this will give us a better place to train and play and give us a platform for our players to be able to train at a higher level, conditions will be perfect for them, coaches will be able to coach at a better level and work on shape and structure which wasn’t always possible in the small training area but now with floodlights we have the perfect area.”

“Through several events we organised going back several years now between flag days, collection on the bridge, we had a golf classic and a Christmas draw which we do every year and we got into a position where we were ready to apply. We were lucky to work with Carlow LCDC, the Carlow Leader programme, they were very good in showing us how to get applications for it and see the development through. The big sell for them was the 500m community walkway, adjacent to the pitch, this will provide a safe walking environment for members of the community and the public in general. We’re quite proud of it but people don’t talk about it as much. It will help keep parents around during training too.”

St. Fiacc’s committee member Seamus Brennan says that the securement of a lease on new home grounds will only help improve the club. “It’s been in the works for about three years but we still have work to do. It’s still being finalised and it’s with Laois County Council solicitors and our solicitors but it’s nearly there so we’re hoping to be able to start planning and developing soon. Ken Murnane did a lot of work for us in Carlow and Padraig Fleming did a lot on the Laois side to bring it all together. We’ve been jumping from home to home, we were based in St. Fiacc’s School up until Covid when they needed the ground back and likewise with the senior team they were based up at the Presentation College up until Covid. Saplings became involved with it too as they’re looking for a new home so it’s going to be shared between us. We’ve never had a place we didn’t have to rent but we have a place of our own now and we don’t have to look over our shoulders.”

“It’s ours to start working on and developing and hopefully we can start fundraising now. It’s massive because we’ve had a lot of uncertainty the last few years as to where we’re going to play. Once this gets off the ground there will be no more uncertainty, we’ll expand the juvenile side of things, we’ll hopefully get a senior side back and we’ll know where we’re playing every season. It should do wonders for the club that at the start of each season parents won’t be wondering whether to send their kids to us or to another club with a ground. It should allow the club to grow, the more people you have in the club the easier it is to fundraise and there’s very little you can do in terms of grants when you don’t have a home ground so we could never apply for Sports Capital Grants or anything.”

Whilst 2020 was a difficult year for soccer on the pitch, off the pitch clubs are thriving and looking good for when the sport finally returns.