IT was probably an article in this paper which caught Eamonn Byrne’s attention and he drew a connection to what one of his own clubmen had achieved in 2020. When he read that former Carlow Christy Ring captain, Mark Brennan, had been a coach on the Meath team that won the intermediate ladies All-Ireland football final last year he would have realised another Carlow man and a club colleague of his had enjoyed coaching success up in Meath. He tipped the Carlow Nationalist off.

In 2020 he pointed out that Ratoath, with Cian Lawlor on the management team, had completed a senior football championship two-in-a-row in the Royal County. 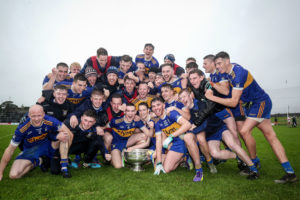 Cian is a Carlow and Tinryland footballer who has had to take a year out due to injury. He is also a qualified Strength and Conditioning Coach who got a Level 7 Degree in 2016 at IT Carlow. Based in the Curragh Camp in Kildare, he was asked by an army colleague would he get involved with the Ratoath coaching team. It was tempting. The club had won the 2019 Senior Football Championship for the first time.

Former Dublin footballer, Davy Byrne, had been in charge when Ratoath won first time round but the club and he had parted company. New manager, former Meath footballer Brian Farrell, was finalising his management team late in the year. Cian was in.

“Brian Cronin, a battalion quarter-master in the army was persuaded to come involved too. They wanted to introduce some military exercises. Because I was in the army and had that degree in strength and conditioning under my belt I was brought up to do bits of both,” recalled Cian.

The Tinryland man was on the 2018 Carlow team which beat Kildare in the Leinster senior football championship. Since then his involvement with club and county had been curtailed because he was stationed in Cork and was injured last year.

The Ratoath post was a God send. He loved the involvement. In the 2020 county final, the club came back from the dead to beat Gaeil Colmcille of Kells in an unbelievable ending to the final. They had conceded a penalty to go three points down and had a man sent off both in injury time. They got one last chance when a high ball fell nicely for the unmarked Joey Wallace and the substitute pawed the ball home for the unlikeliest of winners.

“Absolute madness. It was some experience. We had fire-power there. The history books were written. You always get one chance and the ball went in the right side of the goal,” recalled Cian, who says there could be more to come.

“Ratoath got to the hurling final as well and there are twelve lads who started on the football are on the hurling as well. That is the most impressive stat out of it all,” he maintains.

Cian says he learned a lot from Damien Sheehan, who was the Carlow senior football coach in the glory years.

“Damien is brilliant and one of the best around.”

Now Lawlor wants to resume his own footballing career.

“Looking forward to coming back and playing with Tinryland. Getting a taste of victory with Ratoath, I miss not being able to play,” he says.

Earliest sporting memory: I remember winning the Maurice Nolan ‘B’ U8 against The Blues. Marcus Lawler, Diarmuid Walshe and Paul Kingston (Laois) would have all played with us that day. The late Brendan Hayden would have done commentary and it would have been our first time playing in Dr. Cullen Park. We all thought we were legends.

Memorable sporting moments: 2018 with Carlow, Promotion from NFL Division 4 in Belfast, followed by our run in the championship that year. That was my debut year with Carlow and it was such a special time for the people of Carlow. Being involved as S&C coach with Ratoath in 2020 and winning the Meath senior championship, that was a great experience and to work with some of the best players/people and facilities. The main one has be 2015 U21 final, it was first piece of silverware with Tinryland, I was captain that year and I got to win something with Mark (brother).

Biggest influence on career: I am blessed to have good people around me. Suppose my father mainly. He is great for winding me up before a game. Marcus Lawler and my cousin Conor Lawlor are always good when I am seeking guidance or even to bring me back down to earth when I get ahead of myself. I think anyone who was in the dressing room when Steven Poacher was involved would have learned a lot from him. His mindset was at a different level.

Sporting Hero: I would have taken a little piece of something from many different people over the years. Growing up I suppose, my uncle Damien McMahon would have paved the path for the rest of us in the family. He was successful with Baltinglass when they were the winning back to back titles. My Grandfather, John McMahon, played with Cavan. It is always great to hear some of his stories too.

Most difficult opponent: John Dempsey from my own club. I always struggle to mark him in training and have been on the back of one or two roastings from him. He is one to watch for the future.

If I could turn back the clock: I would have managed and planned my playing career better. I was plagued with injury from a young age probably from a bit of burn out. I had multiple surgeries. I missed a lot of game time and I would have loved to have played more.

Your favourite holiday: My father, brother and I went to Spain in 2011 and I don’t know how he didn’t leave the two of us there. We were young at the time (middle-teens) but had fun and definitely pushed him to his limit a few times. Mark thought we were on a stag do. We did a lot of travelling around Spain that time and it was a great trip.

Memories outside sport: Recruit training when I joined the army, biggest challenge to date. It had good/bad memories, made great friends and was given opportunity’s I would never have got outside the organisation.

Favourite bar/restaurant: I actually don’t drink, but for a coffee and lunch, Neighbourhood. Teach Dolmen for dinner. The Mad Hatter in Castledermot is another hidden little gem.

Three people you would bring to dinner (not family): Margot Robbie, Mila Kunis and Simon Doyle for any breaking ball

What would be heaven for you? I would love to see my daughter Cara pursue sports. She’s only four but already has started to show interest and she enjoys training with me. We do a lot of gymnastics. I was involved with Bennekerry ladies last year, who were a really tight knit bunch of girls and she was a part of the family. I’d get an earful if I didn’t bring her with me. When my playing days come to an end it would be nice to relive them through her.