IT has most certainly been a few tough weeks for us at Newport County with our form being very ropey to say the least and if we are not careful, we will go from being promotion candidates to our season just fizzling out. Nobody wants that to happen. We have not won in the league for over a month but still, if we win the game in hand that we have we will still be in the automatic promotion spots. Nearly every team will go through a rough patch as some stage during their season and it seems to be that in League Two this season all the top four or five teams have gone through it at the same time so even though we could have pulled away from teams the positive is that we have not lost any ground on them either. 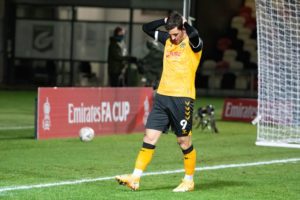 January was a frustrating month for Padraig Amond and Newport County and they need to get back to winning quickly if their promotion hopes are not slip away
Photos: nicnacnoopixs

We went into Saturday’s game away to Harrogate confident enough even though the form had been poor and we started the game really well and deservedly went ahead early in the first half. Sadly, that was where the positives ended as we took our foot off the gas and let Harrogate back into the game and conceded just before half after a defensive error which gave them all the momentum coming back out from the break. Harrogate then took advantage of our generosity and took all three points when we conceded from a set play which is always disappointing when you work on what they are going to do in the build up to the game.

There are only a couple of ways that we are going to get out of the run of form that we are in and they are to work harder than the opposition, cut out our silly mistakes and take our chances in the oppositions final third. I know they are obvious reasons but sometimes you just have to go back to basics and make sure everything is simplified and then if you do all of those three the results will start going our way. We are halfway through the league now and we are in a great position, one that we would have snapped your hand off before a ball was kicked in September even though our form is poor, we have to make it a clean slate from now for us. That starts with this week’s training which is the first full week’s training we will have had for a while. The transfer deadline closed yesterday (Monday) so I am sure we will have made a couple of signings and they have a full week to get to grips with our style of football and to get to know their teammates strengths and weaknesses so hopefully they can be an asset for us. On the other side we are hoping that we do not lose any of our key players either from the first half of the season. The majority of the squad are out of contract in the summer and if the right bid comes in for them it could be hard for the club to turn it down and risk losing those players on a free at the end of the season. That is on the business side of things for the club but from a selfish point and the player’s point of view we don’t want to lose any of those lads.

We have Grimsby Town at home on Saturday and they are another team whose form has not been great of late. They have changed manager since we last played them and my old Grimsby manager Paul Hurst has taken back over in an attempt to change their fortunes around on the pitch. As it stands, they are in the relegation places and they have a dog fight on their hands to get safe this season after the mistakes their previous manager Ian Holloway made and the precarious position that he left them in. I am in no doubt that they have hired the right manager in Hurst to save them, but I hope their revival only starts from after the final whistle on Saturday and we have won the game.

Our home form has been key for us this season and we are at home on Saturday and after that we still have twelve of our final twenty-one games at home too. It is very important that we get back to winning ways on Saturday evening especially with the run of fixtures that we have coming up too.

The Padraig Amond column appears every Tuesday in the The Nationalist