O’Flynn happy to extend term as U20 hurling manager

CARLOW GAA has appointed Patrick O’Flynn as manager of the under 20 hurling team for another two years. Affectionately known as Pado, he is a passionate hurling man from the St Martin’s club in Kilkenny. Never one to let the grass grow under his feet, O’Flynn has hit the ground running and has already approached clubs and players with a view to forming a panel. 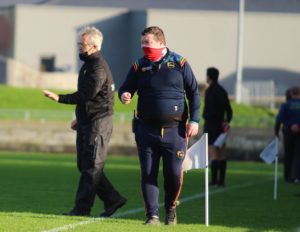 Patrick O’Flynn ON the sideline with Colm Bonnar during the Carlow senior hurling team’s defeat to Kerry in Tralee in the Joe McDonagh Cup last November
Photo: Donal Barry

The side will be coached by Alan Roche of Young Ireland’s in Kilkenny. Alan is a former Waterford IT Fitzgibbon winning coach and has been involved with the Kilkenny senior camogie team.

Pado was initally appointed in November 2018 and has enjoyed every minute of his time in Carlow.

“In fairness, if I had realised what an adventure we would go on at that stage, I would certainly not have believed it. It has been a really enjoyable two years first and foremost. I have made an amount of friends since I got involved with the GAA in Carlow,” he said.

“First of all its fun. The young guys are really enjoyable to work with and in that line as well I have been lucky to get involved with some great people.”

He singles out Tommy Murphy (Naomh Eoin) and Eamon Bolger (Bagenalstown Gaels) in particular but says there are countless more.

He is now drawing on the good will in preparation for a new season.

“We put it out to the clubs in relation to who would like to come in and be part of the under 20 squad. Through the Carlow County Board we got that list out.

“Now the guys are doing their own time-trials. Sham Comerford, the High Performance Coach, is on to them about where they are at in relation to aerobic fitness and is doing out a program for them.

“Some guys have access to a gym at home. Some guys don’t and they will get programs to do in their own time.”

The players are also getting advise on nutrition while former Armagh footballer, Oisin McConville, is giving the squad advise on mental well-being.

O’Flynn has many highlights of his time on Barrowside.

“In the first year I was here, we got to bring the lads over for a team-bonding to Kilkenny. We got them to do some leadership drills with them. It was great to see lads who were shy and timid at the start coming out of their shell taking ownership and leadership. That drove them on for the year and against Antrim when we were down to fourteen men you could see all the qualities that they showed that day shining through. It was absolutely brilliant to see them winning that championship game that day.

“Lads like Ciaran Whelan, Jon Nolan and Tony Lawler drove that thing on.

“It was important the next day against Offaly when nobody gave us a hope we put our best foot forward and showed we could stay in elite company.”

Carlow lost by 1-20 to 1-17 but put it up to the Faithful from start to finish. Last year, they came close again against Laois in Portlaoise which was a game O’Flynn felt they left behind them.

“The narrative coming up to that game was we would do well if we kept it below double figure scores. We should have won that game,” he recalled. A 1-15 to 0-15 defeat was hard to take but O’Flynn went on to become involved with the seniors in the Joe McDonagh Cup.

That journey ended in disappointment in Tralee when the Kingdom struck late to oust Carlow.

Pado admitted he would have loved to have come out onto the Croke Park pitch with those players on All-Ireland day. As a player, mentor and coach he has never had that experience with any team. It would have been a first.

“It wasn’t to be,” he says and you can feel the disappointment in his voice.

The Leinster Championship draw has been put on hold and it will be sometime in the summer before the under 20 hurling championship throws in.

“Until we go back to level four we will not be allowed to do any sort of training together. Obviously the health and welfare of the players is paramount at all times. Any direction we get from our Covid officer, Brian O’Neill, we will be following,” said Pado.

Meanwhile he is determined Carlow hurling will continue to prosper.

“People may underestimate Carlow at times. Over the last five years Carlow, at senior level, are in the top ten counties. At club level Carlow clubs are challenging Kilkenny club sides for provincial titles. We should never underestimate anybody in a Carlow jersey,” is the defiant message coming from a Kilkenny man, who is clearly loving his time in Carlow.