CARLOW’S Ed Byrne is with the Irish squad this week as they prepare for their Six Nations game against France next Sunday.

The Leinster front row man won three international caps from the bench last autumn, including in the crunch Six Nations decider against France in Paris in October, but injury struck and forced him out of the squad just as it appeared he was set for his Irish start during the November series.

That calf injury proved quite troublesome for the 27-year-old and ruled him out of  two Heineken Cup ties in December, but he made a try scoring return from the bench in the PRO14 defeat to Connacht in early January. He appeared off the replacement bench in the subsequent wins over Ulster and Munster, and then again against Scarlets when he was once more among the try scorers.

He wasn’t initially named in the squad for the Six Nations by Irish coach Andy Farrell but linked up with the team before last weekend’s defeat to Wales in Cardiff to provide cover for the front row will remain with the squad this week and will hope to force his way into the matchday squad as Ireland look to bounce back in their first home game of this year’s competition. 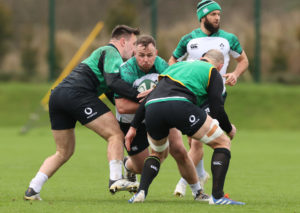 Elsewhere, Johnny Sexton and James Ryan will go through the graduated return to play protocols this week after both left the field during the defeat to Wales having taken knocks to the head.

Jack Conan linked with the squad today, while Peter O’Mahony must wait for a Six Nations discplinary hearing today to see what sanctions he will face following his first half dismissal against Wales.