Blessing’s Blog: What it means to be a Golden Eagle

THE days right before a game are always exciting. Everyone’s focused, and determined to leave everything on the field to prove exactly what they can bring to the team. Our game versus Nicholls State University was rapidly approaching and I was set on making my mark to prove just how passionate I am about becoming a Golden Eagle. 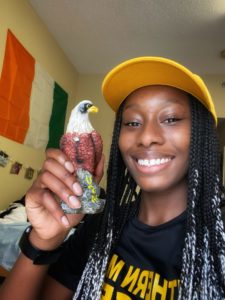 Our day started bright and early as usual, at 5.30am, since we were travelling across states from Mississippi to Louisiana. We met for a quick breakfast in the dressing room at 6am and we were on the road an hour later. Travelling to away games in college isn’t the same luxury as in secondary school. Gone are the days where missing class equals missing schoolwork. Instead, in college, it consists of emailing your professors before you leave so they know you’re missing a class/test/deadline, watching lectures and writing assignments on a bumpy bus.

When we arrived at the pitch, it was starting to sink in that I was going to experience my first ever college game. The pitch was a bit overgrown and nothing like our perfectly manicured home pitch, however, the slightly long hairs reminded of home. Which was all I needed to motivate me before starting the game. Even though I wasn’t starting, I knew that no matter the minutes I received, be it 89 minutes or two minutes, I was going to give my all.

I came on in the 20th minute, the game was a serious battle and was very difficult for me, or any player for that matter, to get any time on the ball or settle into the game. Although, the second half was a different story. We had changed formation and this meant me moving from centre forward (my usual position) to an attacking midfielder in defence but a right-wing in attack, a position I’ve only been played again recently since I arrived here. In this formation, I got a lot more involved in the build up and more of the ball, delivering multiple crosses and taking on players in and around the box.

Soon in the 65th minute, Arial Diaz, a speedy midfielder scored the opening goal, making it 1-0. At this moment we needed to manage the game, slow the game down to make the opposition struggle to get into the game and score an equaliser. I then came off in the 75th minute. A big difference in America is that you can make up to 11 substitutions in a game and each player can re-enter one extra time, so two in total. I came back on in the 87th minute. My only goal in my mind was to manage the game, so as soon as I got the ball, I ran into the corner to run down the clock and secure the win. I did this until there was one minute left in the game. In the last play of the game, we were composed and Ariel scored once again, leaving the full-time score at 2-0.

My up to par performance during the week at training and the match on Wednesday, earned me this week’s ‘Gritty Eagle’ a team voted award that commends the grittiest player during the week. According to our team values, to have ‘grit’ is to ‘have courage and resolve; strength of character’ both on and off the field. You’re willing to push yourself harder than everyone else and encourage every one of your teammates to strive to do better. To survive in this environment you need to have grit, take accountability, be responsible, respectful and hard-working and remain positive at the toughest of times. That is what it means to be a Golden Eagle.