FOR the past 11 and a half years, Luke Hardy has been a mainstay of the IT Carlow soccer department. He led the soccer courses in the college since their inception in 2009 and has been heavily involved with the college soccer teams too. He recently called it a day and departed his role to take up a position within the FAI. 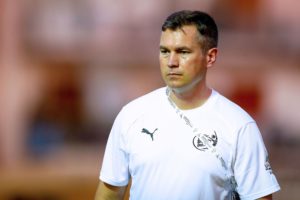 Luke Hardy left his role in IT Carlow after over 11 years
Photo: ©INPHO/Tommy Dickson

Hardy has been in the world of soccer from a young age and his roots lie in soccer having started out as an apprentice footballer at Peterborough United.

“I was there from the age of 12 to 19 and got a scholarship when I was 16. I was released then when I was 19 as I didn’t make the grade as a professional. I went to study in Cardiff Metropolitan University I then where I did a degree in sports development and then a masters in sports development and coaching. My aim was to get a job in football. My first job with the FAI came in 2005 and I was the development officer for Laois and Offaly. I started in IT Carlow in 2009 when the course was launched between the FAI and IT Carlow. For six years I was the Assistant Coordinator and then for the last five and a half years I was the Course Leader,” said Hardy.

During his time at IT Carlow, he managed the college soccer teams too and was quite successful, winning everything there was to win.

“I managed the B team to start with and then moved on to the A team. With the B team we won the CUFL First Division twice and were runners up once and we won the FAI B Team Cup, then when I took over the A team for two years we won the double of CUFL Premier Division and the CFAI Umbro Cup in my first year and then the FAI Cup in my second season. For the last three years then I was the coordinator of all the teams in the college. My only regret is that I won’t get to see the South Sports Campus in full action. It’s been amazing to see the development of the college and the course since I started though.”

Hardy attributes the success of the course to many different factors.

“I think that IT Carlow spotted a niche in the courses we offered, we have sports management, sports rehab, sports medicine, they’ve helped to strengthen our sports teams because it’s helped attract a higher calibre of students. The quality of students that we’ve been able to attract over the years is really important, you get great support from the FAI in terms of coach education and from the college in terms of developing the course. The improvement in facilities helps, the introduction of the high performance gym, the astroturf pitch, the new sports campus, it’s all led to a very successful programme with all the resources and facilities we need.”

“The League of Ireland underage setup has provided plenty of opportunities for young coaches to progress and develop. I certainly hope that in years to come there will be a number of our students working in the League of Ireland youth sector but also the senior set ups too with the Women’s National League and the League of Ireland. Third year students have the chance to do the UEFA ‘B’ Licence so we encourage them to get as many coaching opportunities as possible and with the number of college teams we have, there are opportunities to manage and coach one of the different teams. It’s a real challenge for the students because they’re coaching their peers so it’s different to coaching a schoolboy team so it’s provided a unique opportunity for them. A lot of the guys who took that up are now the ones progressing and coaching in the League of Ireland underage setup so it’s definitely been a huge benefit to the college as well.”

Hardy said he is proud of the impact that the course has had and the success of it.

“It started out as a way of getting students to get a career in sport and that hasn’t changed since it began and now we have so many graduates working in sport be it coaching, playing, video analysis, football administration, development officers, coach education. We have graduates who have done so well in different fields so we achieved what we set out to do and we have several graduates working within the FAI so it’s worked quite well for both. The biggest achievement is the success of the collaboration between the college and the FAI and I’m proud to have been there from the very beginning and helped improve the course and develop it and I think I’ve left it in a good place where Tom and Paul can take it on further. I’ve loved it though, I’ve enjoyed going into work every day and it’s a nice environment to work in. You get a new intake of students every year and watch the graduates progress and develop so it’s been a really enjoyable 11 years. I left during lockdown working from home on a laptop so it would have been nice to say goodbye to everyone but I’m hopeful I’ll get an opportunity to visit the college as part of my new role with some of the education strategies I’m hoping to develop. I’ll look back at it with very fond memories, both working on the course and with the sports department. I’ll now enjoy just watching from afar and hopefully seeing the college and the sports pull above their weight.”

His colleague, Tom Elmes was full of praise for Hardy and credited his hard work and dedication.

“Luke’s helped the course to grow, it’s gone from strength to strength. I came in as an ex graduate of the course and it’s been good to work with him and hear his ideas and how he felt the course should develop. It’s progressed really well and graduates have gone on to great jobs within the FAI and the League of Ireland and Women’s National League coaching roles so it’s all very positive. He puts a great emphasis on coach education and the importance of it. We built up a really great relationship and look forward to keeping in touch with each other. It’s been the most successful of all the bodies of the college and that’s down to the hard work that myself and Luke have put in. The popularity of the course, the success of the soccer teams is all an indicator of all the work that’s been done. His dedication to the role, he constantly pushes social media and its impact, he’s hardworking and the care and attention to detail he gives the students has all helped.”

Filed under: IT Carlow, Luke Hardy

IT Carlow leads the way at Student Sport awards