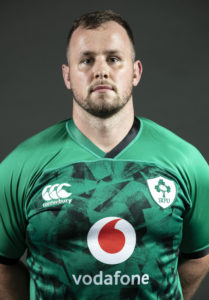 CARLOW’S Ed Byrne has been named on Ireland’s replacements bench for Sunday Six Nations tie against France at the Aviva Stadium.

After winning three caps last autumn, including the last two games of last season’s Six Nations against Italy and France, Byrne hasn’t played for his country since appearing as a replacement against Wales in November.

A troublesome calf injury forced him out of the remaining November Series games and Leinster’s Heineken Cup games in December. He returned to fitness to play a part in Leinster’s three PRO14 games in January but he wasn’t included in the initial squad for the Six Nations.

However, he linked up with the squad before the opening game against Wales and was retained this week ahead of the clash against France.

He is given the nod ahead of Munster’s Dave Kilcoyne and if Sunday’s game follows the recent pattern he will be expected to replace Cian Healy around the 50-60 minute mark, Healy will make his 106th international appearance which means he passes John Hayes as Ireland’s most capped prop.

Elsewhere, Billy Burns has the chance to put last weekend’s nightmare ending behind him as he is named at number 10 with Johnny Sexton not considered after taking a knock to the head last week. Sexton’s midfield partner Conor Murray also misses out after injuring a hamstring during the week and his place is taken by Jamison Gibson-Park. Ireland are also without vice-captain James Ryan for a similar to Sexton’s and he is replaced in the second row by Iain Henderson, who captains the team for the first time. The other change to the starting 15 sees Rhys Ruddock come in for the suspended Peter O’Mahony.

There are also four changes made on the replacements bench with Byrne joined by Ultan Dillane, Ross Byrne and uncapped Craig Casey coming into the squad.