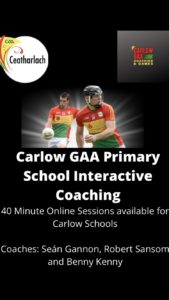 A pilot GAA on-line coaching course initiated by Carlow GAA in early January for schools across the county is rapidly growing in popularity. After just two weeks and with a massive uptake in interest the on-line coaching sessions brought coaching to 813 different households in Carlow. Now that it is established and counties across Leinster and outside the province are set to copy the Carlow initiative.

At the time of the launch, Head Games Development Administrator, Sean Gannon, wondered whether schools and children would be interested in getting involved. He is amazed at the uptake.

“I can’t quite put my finger on it. The fact that they are live classes and we can interact with the children and get feedback means it is some form of normality instead of watching a video,” he says.

“There were 940 households involved last week. There could be two-three children in each house. It has been great.”

The sessions have been rolled out by Games Development Administrators, Brendan Hayden, Benny Kenny, Robert Sansom and Seamus Comerford while Damien Jordan has also been involved. It is a huge boost for everyone that the scheme is being copied outside the county.

Benny Kenny, Damien Jordan and Seamus Comerford are always looking for new ways and new initiatives for coaching especially in these difficult times. For Leinster and other counties to follow suit and start copying our plan is a nice boost.

“The feedback was phenomenal. The kids love it, the teachers really enjoy it. It has been a huge success,” says Sean who speculates as to why the sessions have been so popular.

“Our coaches could be doing it from their own sitting room. A number of children could be doing it outside on their tablets but 95% are in their own sitting room or in their bedroom. The whole thing is they haven’t seen each other for weeks and weeks. Now they are able to come to a social gathering. They are doing the exercises, trying to beat each other’s scores and having a bit of fun. Something they have been missing. I think they really enjoy seeing each other and interacting with each other doing the exercises together.”

For smaller schools like Glynn NS and St Mullins NS, they can come together on-line for the same class while bigger schools could have up to 100 students taking part in a session. The classes are broken down into three different age groups with exercises and quiz questions age appropriate.

The sessions last forty minutes. Gannon says that because not everyone in the class is interested in GAA the exercises and games can be more general rather than all GAA related. A possible benefit for the GAA is that when the pandemic is over perhaps more children might want to join their local GAA club.

Pat Coady, Principal of Borris NS, is delighted to be involved.

“All the coaches are doing great work,” he enthuses.

“There is great variety. Brilliant. It is a great innovation. It is growing and growing in popularity. All the schools in the county want to get in on it. The first week we did it we were on our own, the second and third week we have been in with Ballinabranna. We have to share slots now because there wasn’t enough slots for schools to have it individually. Absolute brilliant,” he says while he admitted he tried to do some of the exercises himself when he logged on.

“The next morning I was hardly able to get out of the bed. I was shocked. We had done a lot of squats and quads. There is plenty of exercise and physical activity involved.

Gillian Murphy, Principal in Kildavin NS, spoke in glowing terms about the initiative. She also took part in the work-out and found it challenging but enjoyable.

“Aine Hickey is a teacher in our school. She got wind that this was happening and she contacted me. To be fair to Carlow GAA we have had a lot of positive support down through the years. The GDAs are brilliant. When I heard this was coming up, I said they will do it properly, they will be engaging and worth a try. We got on-line. It was super. Sean Gannon is delivering our lessons and Seamus Comerford is his back-up with all the information.

Sean’s delivery is superb. It is such a mix of skill and the fun factor, his delivery he is a natural born teacher. A mixture of fun, yet getting the message across.

“I couldn’t speak highly enough of them. I felt the kids rose to it and really enjoyed it,” said Gillian.