CARLOW’S Chris Nolan and Brian Tracey have been named on the Joe McDonagh Cup team of the year for their performances through the 2020 competition.

Nolan started the competition on the substitute’s bench but after coming on early in the second half of the first game against Antrim, he went on to score five points from play as Carlow were held to a draw. He was back in the starting line up against Meath and contributed four points as Carlow won their only Championship game of the season. In the crunch game of the Championship for Colm Bonnar’s team against Kerry in Tralee, the Mount Leinster Rangers man wasn’t found wanting even though the team didn’t get the result they wanted and he scored five points in the defeat, again, all from play. Only a freak set of results in the last round would have seen Carlow into the Croke Park decider but even though the team fell to defeat against Westmeath, Nolan once more scored five points, this time including two from frees. 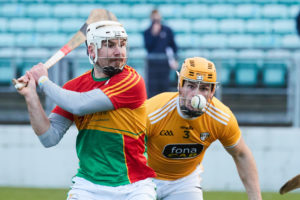 Chris Nolan was named in the McDonagh Cup Team of the Year
Photo: michaelorourkephotography.ie

Naomh Eoin netminder Tracey may have conceded five goals in the first game against Antrim but none of those could be laid at his door and he brought a lot to Carlow’s play with his accurate and long puck outs. He went on on to have fine games against Meath and Kerry before Damian Jordan took over for the last game against Westmeath. 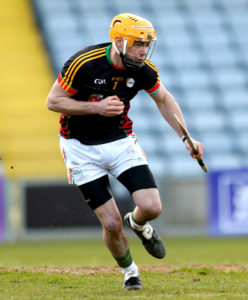 For both men, it was their second McDonagh Cup award after both were similarly named in the McDonagh Team of the Year following Carlow’s title win in 2018.

Antrim, who eventually defeated Kerry in the final, led the way in the 15 picked with seven players honoured, and Conor McCann was named player of the championship.

Uachtarán CLG, John Horan, praised all those who were honoured.

He said: “These awards give us an opportunity to salute the outstanding performers in what was an excellent Joe McDonagh Cup competition. My congratulations to all of those who have been selected and on behalf of the wider Association thank them for the effort they produced in such difficult circumstances in 2020.”

GPA CEO, Paul Flynn, added: “Congratulations to the 15 players who have been selected for the Joe McDonagh Cup Team of the Year. Your performances marked you out as the best among many outstanding performers in 2020. Congratulations too, to Conor McCann on his fully merited awards. I also want to take this opportunity to thank all the players who competed in the Joe McDonagh Cup last year. The lift you helped give to your counties and to the country in very challenging times should not be forgotten.”

A special programme to honour the GAA/GPA 2020 Joe McDonagh Team of the Year will be featured on RTÉ 2fm’s Game On programme this Wednesday evening from 6pm.