BRAVE and Courageous. Are we really back to this? This was just one of the many facets of Ireland’s Six Nation’s game against France on Sunday. Seven days previously, a 14 man Irish team came up just short against Wales away from home.

On Sunday there may have only been two points in it at the end and while the scoreline gave hope, there was no doubt. France were the better side, played most of the rugby and fully deserved their win. 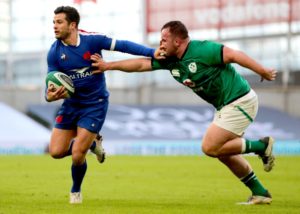 Both sides showed seven changes from the respective starting line-ups when they last met in Paris in a rejigged 2020 championship format. France won 35-27 that day behind closed doors. Again without the crowd, this was a more dogged affair. Absorbing yes but dour. Defences ruled and it took two moments of brilliance from the French scoring a try in each half which was just about enough to get them over the line.

France turned up on Sunday with the same front five they used in 2020 while the Irish front row of Cian Healy, Rob Herring and Andrew Porter also started both games.

This was the kind of game Ireland needed to stamp their authority on. They had an early chance to go ahead but in shades of last week when Billy Burns failed to find touch into the corner against Wales, he completely miscued a penalty in the first quarter. It was the equivalent of a golfer driving his ball right and out of bounds. Even at this stage of his international career the Ulster out-half gives out an aura of someone who is a little uneasy on the international stage. It was important for him as he made amends when nailing a penalty to give his side a 3-0 lead on twenty minutes.

To his credit, Burns was involved in the move which put in James Lowe in the corner for what looked like a good try. In a game of inches, the TMO spotted the Irish winger had put a foot marginally in touch. With Bernard Le Roux in the sin-bin for an intentional trip on Keith Earls, an Irish try would have been huge at that stage.

Instead it was the French who turned the screw and a typical Gallic surge while playing the ball through the hands saw captain, Charles Ollivon, go over relatively unopposed against a stretched Irish defence. Matthieu Jalibert added the points and was on target with a penalty just before the break when Cian Healy was adjudged not to have rolled away quickly enough. It was a harsh call. Then again the referee was on the spot and, at this level, body language means everything.

Early in the second half, the prop was in trouble again. This time not of his own making when he and Irish captain, Iain Henderson collided head to head. He looked to be in serious trouble and when Carlow man, Ed Byrne, replaced him you couldn’t see Healy returning. That he did is huge testimony to the veteran international’s resilience and willingness to battle for as long as he could. Eventually he did make way for Byrne.

Fifty six minutes in Ireland were given a mountain to climb when France worked the ball off a scrum. With a penalty advantage coming they went wide and Damian Penaud went over in the corner as the Irish defence were sucked in. This time the conversion was missed but at 15-3, it looked like this was France’s victory to lose. Short at least five first choice players including Peter O’Mahony, Conor Murray, Johnny Sexton, Jacob Stockdale and Caelan Doris there looked to be no way back for the Irish.

Anything they got would be hard-earned from there but they went about it the right way. On 56 minutes they disrupted a French line-out. When the ball bounced up nicely for substitute, Ronan Kelleher, the reserve hooker ran unopposed for a try in the right corner. Ross Byrne converted and it was game on.

Fifteen minutes to go Ross Byrne didn’t even hesitate when Ireland were awarded a penalty. In contrast to his name sake’s first half effort, Ross looked like a man who wanted to take on the responsibility and the thought of missing never even entered his mind. From distance, he nailed it. Sadly, that was as good as it got for Ireland. They had plenty of possession in the final quarter. Ed Byrne’s scrumming ability meant his side were never getting the ball going backwards. Having said that, they were fortunate when another Jalibert penalty hit the post where Ireland gathered and cleared.

At the end it was all Ireland but never in a place where they could engineer a drop-goal attempt. To their credit, France were disciplined. In situations where the home side is doing all the attacking, the referee’s eyes will be watching out for any possible defensive indiscretion. Mr Luke Pearce of England was never even tempted.

It was excruciating to watch. Ireland had so much ball but were forced back ever so slowly towards their own half-way line and further back again. With just over 81 minutes played on the clock, the home side were finally turned over and a relatively inexperienced group was undone. Their tactics will be scrutinised. A lot of huge and puff with relatively little ingenuity.

Directly translated. It is magnificent but it is not war.

Confidence must be brittle now. They have two weeks to prepare for their next match away to Italy. That is a must win. Then Ireland go to Scotland who are flying at the moment. Two games they must win which would set them up nicely when England arrive here on the weekend of 20 March.

The presence of Rhys Ruddock in the Irish side is a tribute to the player who has backed himself and his rugby career. Son of former Wales and Leinster coach, Mike Ruddock, he opted to join the Leinster Academy rather than Ospreys. Interestingly he made his Leinster debut against his father’s old club Newport Gwent Dragons.

He got his first senior cap in the Irish summer tour to Australia in 2010. Two years later, he became, while still playing for the Leinster under 20s, the youngest ever captain of Leinster against Arioni in the Magners League.

The subsequent arrival of Sean O’Brien saw him slip down the pecking order in both the province and the national squad but he has persevered. Capped 26 times for Ireland but never in the Six Nations, he came in for the suspended Peter O’Mahony on Sunday. Even in defeat, he will surely have enjoyed this one.

Also, there is no harm in reminding readers that Ernie Porter, father of Andrew who started for Ireland on Sunday, won a Towns Cup medal with County Carlow in 1977.