WITH fifteen games left in the Premier League this season, it is all but over with Manchester City seven points clear with a game in hand. In any other year it would be very silly to call the title race over at this stage as we have seen teams blow a lead like this before, but this year is very different. The chasing pack keep dropping points left right and centre and it looks like nobody wants to challenge Man City. That and the fact that Man City are on an unbelievable run of form where it looks like they are just going to win every game remaining this year.

Of the title challengers, Liverpool have been the most disappointing considering how impressive they were when winning the Premier League title last season. They won the league by eighteen points and looked like they were ready to dominate or at least go close to winning the league for years to come but they are miles off it this season. Of course, they have lost a major player, Virgil Van Dijk, to a season ending injury but their lack of recruitment in key areas in the summer was extremely poor. Liverpool were in a position where they were winning trophies and playing such an attacking and attractive brand of football that they could have enticed the majority of world class players to Anfield and made sure they were building a dynasty, but they haven’t done that. 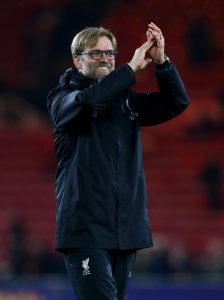 Diego Jota and Thiago Alcantara were good signings for the club, but they needed a couple more players in those positions too to help with the amount of games that the club were playing now so they could compete at every level in the same season. How they didn’t go and buy a centre half last year when they only had three senior centre halves at the club I don’t know and when all those three were injured in January they went out and panicked into signing two centre backs who despite them being good footballers are nowhere near the level that Liverpool should be aspiring to sign. Ben Davies from Preston was one of those players and I know a couple of lads who know him, and they have said he was shocked by the fact Liverpool wanted to sign him. Before Liverpool came in for him in the last couple of days in the transfer market Celtic was the only top flight side that wanted to sign him and that was going to be on a free at the end of the season. They only signed Davies permanently and then Ozan Kabak on loan until the end of the season as a stop gap until the others are back fit, but they still need another senior centre half regardless. As unusual a signing as Ben Davies was, the Kabak one is even stranger. He signed from Schalke 04 who are bottom of the Bundesliga and had only won one league game this season, so it wasn’t like he was very in-form and sought after.

Liverpool’s transfer policy has been excellent in the last three or four years but this year they have got it very wrong. They have ended up with Jordan Henderson and Fabinho playing centre back for quite a bit of the season and they just aren’t naturals in those positions. Not only that but they have taking them away from their engine room in midfield and they have suffered there because of it too. They might have to try and replace another of that title winning midfield team soon as Georginio Wijnaldum is out of contract in the summer and it doesn’t look like they are close to him re-signing for the club. To lose a player as important as him would be terrible for the club and it will cost a lot of money to replace him too.

They are well and truly out of the title race and they even have a massive fight on their hands to make the Champions League spots and that would be a travesty for the club after their exploits in the competition in recent years. Jurgen Klopp has done an unbelievable job at the club since he took over and the club should be bending over backwards to help him make Liverpool the biggest club in the world again, but it looks like this year they have let him down badly and ultimately, they club could be the biggest losers in all this. I hope I am wrong with this, but we could be nearing the end of Klopp’s time at Liverpool. I don’t think the club will sack him, but I could see him walking away over not being backed properly and also because he has just suffered some personal tragedy with his mother dying in the last week too. Klopp is a very emotional and energetic manager who wears his heart on his sleeve, very similar to Pep Guardiola, and I think he might have to do something similar to what Pep did when he left Barcelona and take a year out of management to recharge the batteries. I hope he doesn’t leave the Premier League because it is a better league with him there, but he will ultimately do what is best for him and that is the most important thing for him.