IN the middle of October last year, with a full list of fixtures set for the weekend, basketball was set to resume. Then, as quick as a rebound specialist gathers possession and sets up an offensive move, the season all but ended on 15 October. In November, it was confirmed the leagues were going to be abandoned. It eventually became inevitable that any further hopes of having a truncated season were dashed completely when the Level 5 restrictions were introduced in January just gone. 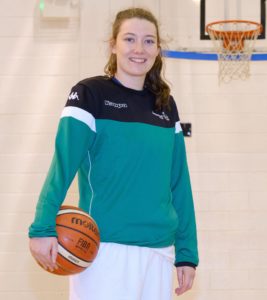 Covid restrictions have led to a frustrating time for Amy Dooley
Photo: michaelorourkephotography.ie

Carlow basketball and underage international player, Amy Dooley, remembers vividly where she was when the rising Covid numbers in the Autumn put paid to a resumption to a sport she loves and has been so successful at. All the more in that she was playing with crack side, UCC Glanmire now.

“We were actually training in the Mardyke. We were all together. We were training for a match against Marble City Hawks on the following day,” she recalled.

“It was a whole big whirlwind. We had two Americans over here. We didn’t know how it was going to be for them. Eventually they went home after two weeks. A whirlwind of emotions. We were all looking forward. We hadn’t had a match in seven to eight months. We had a really good team and were devastated it was called off.”

The basketball cancellation was the second disappointment for Dooley. She was on the Old Leighlin team who had qualified for the Leinster intermediate final against Tinahely.

“Two weeks before basketball was called off, the Ladies Gaelic Football Association came out and said our Leinster final was postponed. We were disappointed. It was our second Leinster final in a row not to be allowed play.”

It will be remembered, Old Leighlin, were incorrectly allowed play in the 2019 junior championship, but after winning three matches in the competition were not allowed to play their final. Somewhere along the line someone discovered, they should have been placed in the intermediate grade after beating Castleknock in the junior final the year before. Amy was not on that winning so she was really looking forward to that junior final and then this year the intermediate decider.

“For me, I was gutted. I hadn’t played in the first Leinster final (which Old Leighlin won) and now I was missing two,” she said.

She is not feeling sorry for herself. From an economic and health issue, she knows there are bigger issues at play at the moment.

“At the end of the day, sport is not the main priority and we have to be careful,” she points out.

She says the decision of Basketball Ireland to abandon the season is a good one.

“I believe there were some Americans over here waiting for the season to start and it never happening. That is their livelihood. You can’t keep them waiting. It is disappointing not to have played a basketball in eleven months but I think it is better to start with a clean slate in September.”

Like most students, college work is carried out on-line now. Her levels of fitness are maintained without travelling too far. The sense of anticipation for a new GAA season may be on the long finger but so be it. .

“I have been pottering along myself. Doing my own workouts, running. Before the announcement, it was all go, fitness running on the road, walking the dog. College work is all on-line on the kitchen table.”

She says she fully supports any decision which will ensure people remain health, safe and well.

“It is hard. I do think we will get back and it will be something to look forward to. Maybe when we get back it will be less training and straight into matches because we won’t have time. In the interests of all our safety we have to take and treat Covid and everything that it has brought as serious as possible.”