THE action from the Guinness PRO14 Championship will recommence this weekend with all teams back in action for Round 12 after a break in the competition. Connacht will be the only Irish team to play at home this weekend with Ulster, Munster and Leinster all travelling to complete their fixtures.

Leinster will travel to Wales this week to face the Dragons in their home ground of Rodney Parade. Dragons have recorded a series of consecutive losses from their past few PRO14 games and currently sit in second last place of Conference Table A as a result. The current champions Leinster have a much better standing and currently hold the top spot in the Table, four points ahead of second-place Ulster, having only recorded a single loss this season.

Both teams will have to play with some players missing to their respective national teams currently playing in the Six Nations Championship. A total of seventeen Leinster players are included in Andy Farrell’s Ireland Squad; however Leo Cullen will welcome the release of Ryan Baird, Ross Byrne agus Jack Conan for this game. Dragons have four of their players currently with the Wales team that is preparing to face England next week. Leinster managed to record a comprehensive win over the Dragons when they met in the RDS earlier in the competition. Ashton Hewitt managed to get over the line for the Dragons in what was their only score of the night. The game ended on a scoreline of 35 – 5.

This game will be broadcast live on TG4 with coverage starting at 19:30. Máire Treasa Ní Dhubhghaill will present the show with Cuán Ó Flatharta being joined by Eoghan Ó Neachtain for commentary duty.

Dan McFarland’s men will head to Scotland this round to face the Glasgow Warriors. He will be without three of his players as they continue to train with the Irish squad as part of the Six Nations campaign, however Stuart McCloskey and Tom O’Toole will return to the province for this game. Glasgow Warriors have a total of nine of their players away to the Scottish national team as they prepare to face France in their next game.

Ulster currently hold second place in Conference Table A, just four points behind reigning champions Leinster. Glasgow Warriors sit further down the table, having achieved only fifteen points so far in the competition. The first time these two teams met in this season’s championship in November, it was Ulster who came away with the win, on a final scoreline of 40 – 15 in Kingspan Stadium.

All the highlights from the game will be broadcast at 21:30 on TG4 with Seán Ó Finneadha providing all the commentary. 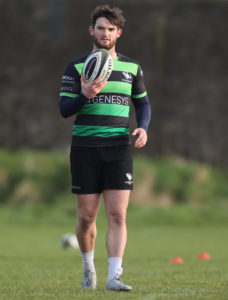 Connacht will welcome Cardiff Blues to the Sportsground this weekend and are the only Irish side to play at home in their Round 12 fixture. The Blues are missing eleven players missing to the Welsh national team partaking in the Six Nations Championship. This may provide Connacht with a certain edge as they welcome back Bundee Aki, Ultan Dillane and Dave Heffernan from the Irish squad for this game.

There are just six points between these two sides in Conference Table B with the Westerners holding second place and Cardiff Blues just behind them. This game is therefore expected to be a battle with both sides grappling for points. Their previous meeting this year ended on a final scoreline of 29 – 7 with Cardiff Blues coming out on top on their home ground.

This game will be broadcast live on TG4 from the Sportsgrounds with coverage starting at 19:15. Máire Treasa Ní Dhubhghaill will present the show with Garry Mac Donncha providing all the commentary alongside Eoghan Ó Neachtain.

Johann Van Graan’s men will also travel this weekend to face Edinburgh over on their home turf. Munster currently hold the top spot of Conference Table B with a total of 42 points. Edinburgh sit further down the Table with only 19 points gained over the course of the season so far. The last time these two sides met in Thomond Park in October, Munster managed to come out on top after a tight game which ended with a scoreline of 15 – 23.

Munster have ten players included on Andy Farrell’s squad for the Six Nations but will welcome back Craig Casey, Andrew Conway, Shane Daly and Chris Farrell for this fixture. Edinburgh contribute a total of eleven players to the Scottish national team but will also welcome back some released players for this game.

All the highlights from this game will be broadcast on TG4 at 21:50 with Aonghus Ó hEochaidh on commentary duty.