Carlow town man ‘over the moon’ after getting Covid jab 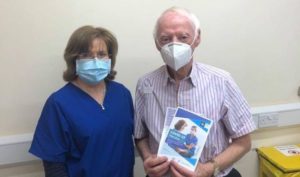 AN 85-year-old Carlow man said he was “over the moon” after getting one of the first Covid-19 vaccines for the general public in Carlow. Joe Costigan received his first dose of the Moderna vaccine from his GP Dr Niamh Gallagher at Gallagher Medical Practice on Dublin Street last Tuesday.

“I have been looking forward to it for quite some time, being in lockdown the last year,” said Joe, who lives on the Tullow Road with wife Kitty.

He was the first patient to receive the vaccine at the Dublin Street surgery and the practice was the only one in Carlow town, if not the county, that began vaccinating the over-85s last week.

Joe believes the start of the vaccination programme in Ireland should give hope to people and they shouldn’t be afraid of it. He also said the vaccine injection had been effortless and had no negative effect on him.

“The green shoots are coming in the country; it’s looking good, but we have to be careful and it seems it might be September before normality returns. At the start, when we were cocooning, people were saying it might be five or ten years before you get a vaccine. Within a year, we have great vaccines, three or four of them.”

Joe doesn’t see his lifestyle changing much in the near future, but joked that he was looking forward to getting back out on the course at Carlow Golf Club, where he is a member.

“We still have to go out, wear a mask, even though we should be safe,” said Joe. “What I’d be hoping for is that the golf club will say whoever is vaccinated can come back playing golf! That would be nice!”

Joe and Kitty have four children and five grandchildren. Three of the children live outside Ireland so there have been weekly Zoom get-togethers and card games over the past year. “They were all thrilled to hear the news, especially when they can’t get down to visit,” said Joe.

Originally from Co Laois, Joe formerly worked with Telecom Éireann and Caredoc and is a member of Carlow Lions Club and Carlow Sports and Social Club. He found it important to keep busy during the lockdown and organised a weekly ‘seisiún’ of music and storytelling on Zoom with more than a dozen others. They previously held the event in the Seven Oaks Hotel, but took it online when Covid-19 hit.

“To be honest, these are the things that have kept me going,” said Joe, who plays the button accordion. “They were a big help.”

There is also a bit of good-natured banter in the house now that Joe has received the vaccine, while Kitty will be waiting a bit longer to receive hers, as she is not yet 85.