Yellow and orange warnings in place across the country 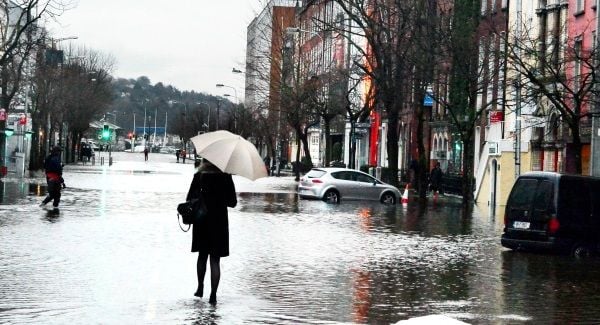 Heavy rain is set to continue in the south of the country on Tuesday, bringing more local flooding, as a status orange Met Éireann rain warning remains in place.

As reported by The Irish Times, the status orange warning covers Cork, Kerry, Tipperary and Waterford, with between 50 and 80mm of rain to fall, bringing river and surface water flooding. The weather warning came into effect on Monday evening and remains in place until 9pm on Tuesday.

A lower level status yellow warning is in place for the rest of the country due to the heavy rain overnight and into Tuesday, with 30 to 50mm of rain expected. The status yellow alert remains in effect until 9pm tonight.

A spokeswoman for ESB Networks said it was dealing with a small number of power outages to homes and businesses, which she said were “business as usual” rather than the result of any major damage from the bad weather, with crews working to restore power.

Kerry County Council warned people to “expect poor driving conditions on all routes this morning with spot flooding and surface water in all areas”.

Cork County Council announced a number of roads were “impassable” on Tuesday morning due to flooding. The council had put sandbags and other flood defences in place at a number of flood prone locations, such as Skibbereen, Fermoy and Mallow, in anticipation of the heavy rain.

Cork City Council Director of Operations David Joyce confirmed that the city had activated its flood plan and closed a number of roads around the city in anticipation of the bad weather with heavy rainfall forecast to last all day and into the early hours of Wednesday morning.

Mr Joyce confirmed that Cork City Council has already closed the Lee Road, the Cloghroe and the Inniscarra Road in the Lee valley as recent heavy rains had led to a rise in water table levels resulting in the Lee and many of its tributaries bursting their banks upstream of the city.